A 50-year-old man with history of alcohol abuse was sent to the emergency room (ER) after developing generalized weakness. He was recently diagnosed with hypertension and started on lisinopril and hydrochlorothiazide 2 weeks prior. He typically drinks 8 beers a day and drinks a lot of water to “stay hydrated.” He attempted to stop his alcohol intake entirely the day before he presented to the ER. The same night, he woke up with blood on his pillows and bite marks on his tongue. Review of systems revealed muscle pain in his proximal extremities. In the ER, his serum sodium was found to be 105 mEq/L with CPK greater than 20,000 U/L.

On exam, his blood pressure was 131/81 mm Hg with heart rate 87 bpm. He was alert and oriented. Physical examination, including neurologic examination, was unremarkable.

In the ER, he received 6 liters of normal saline IV over 4 hours. A repeat serum sodium value after that was 119 mEq/L (up from 105 mEq/L). Urine output was 3 liters in the last 4 hours. Nephrology consultation was requested.

This case was prepared by Yongen Chang, MD, PhD, Assistant Clinical Professor, Division of Nephrology and Hypertension, University of California-Irvine.

This is a typical case of beer potomania. Alcoholic beer drinkers like this patient are at high risk of developing hyponatremia due to their low-protein, high-water diet. Very low dietary solute intake (compared with water intake) leads to extremely low urinary solute excretion that exceeds the maximal urinary dilution capacity. This, in turn, results in diminished water excretion even though urinary dilution in itself is intact. In this case, adding a thiazide diuretic exacerbated patient’s hyponatremia.

In cases of beer potomania, the serum sodium concentration increases quickly after increased solute intake such as after IV normal saline. The resulting rapid correction of hyponatremia is very dangerous because of the risk of osmotic demyelination syndrome. The clinical presentation of osmotic demyelination ranges from dysarthria and dysphagia to paraparesis or quadriparesis and even coma. The onset is typically 2 to 6 days after rapid correction of serum sodium. Brain imaging such as MRI demonstrates signal changes consistent with encephalomalacia, usually in the central pons. However, changes on brain imaging may be delayed several weeks after the onset of symptoms. Patients with chronic hyponatremia or hyponatremia of unknown duration who present with serum sodium less than 120 mEq/L are especially at risk of developing osmotic demyelination. Several observational studies in humans showed that rapid rates of correction of chronic hyponatremia are associated with osmotic demyelination1-3. Most of these studies reported daily, not hourly, rate of correction of sodium. For example, one study showed that correction of serum sodium by less than 5 mEq/L per day was not associated with adverse neurologic complications1. If over correction has occurred, it is recommended to relower serum sodium so that the rate of correction does not exceed more than 8 mEq/L within 24 hours to reduce risk of osmotic demyelination syndrome. Therefore, choice E is the correct answer. Serum sodium should be lowered at approximately 1 mEq/L per hour. This can be achieved by administering IV D5W in combination with desmopressin. D5W is typically given at 6 mL/kg over 2 hours and is repeated until serum sodium goal is achieved. Desmopressin is used to prevent serum sodium from rising again due to excretion of dilute urine and should be continued after discontinuation of D5W. This strategy has been shown to be feasible and safe in several retrospective studies4-6.

Choices A and B are incorrect because continuing IV saline or sodium bicarbonate will further raise serum sodium. Here, the patient developed rhabdomyolysis after most likely a seizure activity due to alcohol withdrawal. However, he has already received 6 liters of IV normal saline and is likely adequately volume expanded. His renal function is normal with excellent urine output. The priority at this time is to relower serum sodium to prevent osmotic demyelination. Choices C and D are incorrect because simply holding IV normal saline is insufficient to lower serum sodium. Serum sodium will continue to rise due to excretion of dilute urine without administration of IV D5W and/or desmopressin. Furthermore, fluid restriction will worsen the overcorrection of serum sodium. 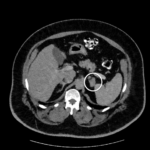