Men of low socioeconomic status (SES) are more likely to present with metastases when they are diagnosed with prostate cancer (PCa) and are at higher risk for having advanced or aggressive PCa discovered at the time of radical prostatectomy (RP), according to recent studies.1,2 In addition, men of lower SES are less likely to undergo RP or external beam radiation therapy (EBRT) for localized PCa, and they have decreased cancer-specific survival after these treatments compared with men of higher SES.3 The reasons are unclear, but urologists in American cities with large poverty-stricken populations say impoverished men with PCa frequently encounter barriers to optimal care, such as poor fundamental health knowledge, no or inadequate health insurance, lack of social support, difficulties with arranging transportation to and from medical appointments, and unstable living situations. The consequences of these impediments include low rates of PCa screening and frequently missed medical visits that make patient follow-up and continuity of care problematic or impossible.

“When you are treating patients of a lower socioeconomic status, you have to consider that there are lots of obstacles for them being able to come to the doctor regularly and get routine care,” said Alexander Sankin, MD, of the Montefiore Medical Center in the Bronx, New York, a facility that serves a population of which 85% of individuals are on Medicaid or Medicare..

Depending on where patients live, transportation can be a significant issue, explained Dr Sankin, who is also associate professor of urology at Albert Einstein College of Medicine.

In addition, personal circumstances can prevent patients of low SES from keeping appointments. For example, with schools closed as a result of the COVID-19 pandemic, some men with PCa from impoverished neighborhoods have had to stay home with their children, making it difficult “to just head out and come to their routine doctor visits because they had to take care of their kids,” Dr Sankin said.

Since the pandemic hit, however, “we really ramped up on telemedicine services here so that we are at least able to continue to provide some level of service to patients if they are not able to physically come in.”

health literacy compared with other patients. In these cases, Dr Sankin said, he spends more time explaining the risks and benefits of the various treatments. Patients can “sometimes be a bit overwhelmed by the options available to them,” he said.

“Some patients have low health literacy and have difficulty assimilating all the information and making an educated decision,” explained Dr Reese. “Even then, it sometimes is unclear to me that they truly grasp all the pros and cons of the various treatment options.” Patients’ inability to fully comprehend what different treatments entail could impair their engagement in shared decision making with their physician, he said.

Failure to keep follow-up appointments is another commonly encountered problem with impoverished men with PCa. This could present problems if patients opt for active surveillance (AS), which requires a patient’s commitment to PSA testing at regular intervals, possible follow-up imaging studies, and prostate biopsies. For all patients considering AS, Dr Reese explained, he carefully explains the follow-up protocol and emphasizes the importance of keeping medical appointments. When patients have clearly shown they are unable to adhere to the follow-up requirements, Dr Reese said, he will reemphasize that adherence to follow-up is essential to make sure their cancer is well controlled. “But if they’ve missed multiple appointments despite my best attempts to contact them and reach out to them, then I will recommend that perhaps surveillance is no longer the best option and recommend a transition to definitive treatment.” In a small percentage of cases, patients “just disappear,” he said.

Insurance status also can present issues in PCa management. For example, getting third-party payer approval for magnetic resonance imaging (MRI) scans of the prostate prior to prostate biopsy, which has been shown to improve diagnostic precision, “can be a little more challenging in the underinsured or poorly insured patient.”

Moreover, poverty-stricken patients who have undergone RP could face obstacles in obtaining treatments for postoperative complications, such as pads for urinary incontinence and oral medications to treat erectile dysfunction, he said.

“Low education levels are common among men with socioeconomically disadvantaged neighborhoods and this lack of education likely works in concert with SES in predisposing patients to adverse prostate cancer outcomes,” the authors wrote.1

Jamal Nabhami, MD, chief of urology at Los Angeles County + USC Medical Center (LAC + USC) in Los Angeles, California, which serves a predominantly low SES population, said patients’ lack of health insurance is his biggest impediment to treating and monitoring patients of low SES at his institution. In addition, these patients may have problems keeping medical appointments, such as transportation issues and loss of pay from having to take off work to make those visits. “Circumstances in life sometimes make follow-up more difficult,” he said. “In our healthcare system, we try to meet those needs as much as possible.” For example, staff will try to work with patients to schedule appointments that are convenient for them.

Another dilemma Dr Nabhami faces when treating indigent men with PCa is an inability to contact them to schedule and remind them of appointments, as these individuals may not have stable addresses and phone numbers.

Courtney M.P. Hollowell, MD, chairman of urology at Cook County Health in Chicago, Illinois, which provides health care to a large underserved population, said he has found that patients of low SES with PCa are more likely than their high SES counterparts to present with locally advanced or metastasis disease. Dr Hollowell said he attributes this disparity in large measure to lower rates of PSA screening among impoverished men caused in part by lack of access to regular preventative healthcare services, such as those provided by primary care doctors.

“Patients of low socioeconomic status are much more likely to be uninsured and not be plugged into a healthcare system and see a doctor on a regular basis,” Dr Hollowell said, adding that many men consulting with him for the first time have never been screened for PCa, have a higher PSA at diagnosis, and a shorter survival rate than those of a higher SES.”

Other reasons for the low rate of PSA screening among low-income men include a controversial 2012 recommendation against the practice from the US Preventive Services Task Force and a general mistrust of the healthcare system. Moreover, some men of low SES “have the attitude of, ‘What you don’t know won’t hurt you,’” Dr Hollowell said.

He noted that smoking, being overweight, physical inactivity, and other unhealthy lifestyle factors can be more prevalent in a low SES population and could also contribute to worse PCa outcomes.

Making anticancer medications available to patients presents a challenge to providing optimal care, he said. The cost of these drugs are rising at an alarming rate “while the poor [patients] I see every day struggle with out-of-pocket costs and sticker shock for these lifesaving cancer treatments,” Dr Hollowell said.

“It’s difficult to make a decision between lifesaving treatment and food on the table.”

Despite financial hardships faced by many patients with PCa, Dr Hollowell has found that these men generally take their disease management seriously. Socioeconomic status has not been a major barrier for patient follow-up, he said. “When patients know that they have a serious cancer, and they understand the importance of its treatment and follow-up, my patients not only show up, they show up on time, and they show up for every visit.”

Mohummad Minhaj Siddiqui, MD, associate professor of surgery at the University of Maryland School of Medicine and director of urologic oncology and robotic surgery at the University of Maryland Greenebaum Comprehensive Cancer Center in Baltimore, sees many patients from impoverished parts of the city and outlying areas of the state. It is not uncommon for him to consult with patients who present with advanced or aggressive PCa, and he attributes this in part to a lack of health insurance. Without a way to pay for regular PCa screening, men may wait until they experience symptoms of later-stage disease such as pain to seek medical care, he explained, adding that some of his patients, prior to meeting with him, had not been to a doctor in many years.

In addition, Dr Siddiqui related that some poverty-stricken patients struggle with the rigors of living on the streets, so routine medical care may rank low on their list of concerns. “If they’re dealing with homelessness, then prostate cancer screening is not a high priority in their lives,” Dr Siddiqui said.

Still, although patients of low SES often face obstacles to adhering to follow-up appointments, they do take their PCa care seriously, Dr Siddiqui said, adding: “When patients are diagnosed with cancer, it’s surprising how motivated they can be no matter how crazy their lives may be.”

Health Disparity
Next post in Prostate Cancer Management Across America 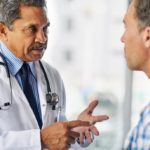