RNU + AC patients had significantly higher overall survival rates at 5 years than RNU-only patients (72.7% vs 51.6%), Tomohisa Matsunaga, MD, of Osaka Medical College in Japan, and colleagues reported in World Journal of Urology. Pathologic vascular invasion was significantly associated with a 3.4-fold higher risk for all-cause mortality compared with no vascular invasion. In contrast, AC significantly correlated with a 55% lower death risk compared with no chemotherapy.

“Given that this survival benefit by AC was restricted to patients with the vascular invasion, it is plausible that the pathological review from the specimen of RNU, which is a major advantage in AC unlike NAC [neoadjuvant chemotherapy], would be a definitive indicator to identify the patients who are likely to benefit from AC after RNU,” Dr Matsunaga and colleagues stated.

Cancer-specific survival at 5 years also was significantly longer in the RNU + AC group than those treated with RNU alone (72.7% vs 54%), the investigators reported. Bladder cancer recurrence-free survival did not differ.

Previous or concurrent bladder cancer at UTUC diagnosis could have influenced the survival rate associated with AC, which is a limitation, according to the authors. Residual glomerular filtration rate after surgery also likely influenced the decision to administer AC. 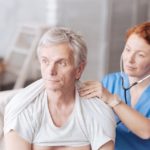