Radiation treatment may improve survival of patients with stage IIa testicular seminoma compared with multi-agent chemotherapy, according to a new report.

A team led by Sushil Beriwal, MD, associate professor of radiation oncology at the University of Pittsburgh, compare modalities. The investigators analyzed data from the US National Cancer Data Base for 2,437 patients with stage II testicular seminoma diagnosed from 1998 to 2012 and treated with radiation or multi-agent chemotherapy after orchiectomy. Of these, 960 patients had IIa disease and received radiotherapy (78.1%) or chemotherapy (21.9%) over a median 65 months; 812 had IIb disease, with 54.4% and 45.6% having radiotherapy and chemotherapy, respectively; and 665 had IIc disease, with 4.2% and 95.8% receiving radiotherapy and chemotherapy, respectively. The median radiation dose was 30.9 Gy for stage IIa and 35.5 Gy for stage IIb.

For stage IIa patients, 5-year survival was better with radiotherapy than with multi-agent chemotherapy (99% vs 93%), according to results published online ahead of print by Clinical Oncology. The improvement with radiation persisted after adjustments for factors that could introduce a bias.

For those with stage IIb disease, 5-year survival was 95.2% for radiotherapy compared with 92.4% for chemotherapy. “We view stage IIb disease as a spectrum where smaller volume disease patients … may act more like IIa disease and attain the greatest benefit from radiation therapy, whereas patients with a larger volume of disease … may act more like IIc disease and attain the greatest benefit from chemotherapy,” explained study co-author Scott Glaser, MD, of the University of Pittsburgh Cancer Institute, in a news release. For stage IIc patients, there is clear consensus that multi-agent chemotherapy is the preferred treatment because the risk of distant progression is high.

The investigators observed a slow shift away from radiation toward chemotherapy in the treatment of stage IIa and IIb in recent years that now needs to be corrected. One of the causes may have been a misperception of their relative toxicities. Other factors associated with increased chemotherapy use were later year of diagnosis, treatment at an academic center, and positive lymph nodes confirmed by pathology. 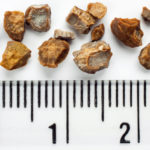