Black men with low-risk prostate cancer (PCa) are slightly more likely than their white counterparts to switch to active treatment after initial observational management, independent of baseline and follow-up clinical measures, according to a new study.

The study also confirmed previously identified clinical triggers of initiating active treatment, and these factors did not vary by sociodemographics.

“A primary reason that we examined whether sociodemographic and clinical factors predicted switching to active treatment was that studies have primarily been performed in non-ethnically diverse populations,” co-principal investigator Scott P. Kelly, PhD, of the Lombardi Comprehensive Cancer Center at Georgetown University Medical Center in Washington, DC, said in a press release. “We wanted to determine whether observational management like active surveillance is underused in minority populations, particularly within the framework of an equal access health care system. This is one of the few groups studied with sufficient sample sizes to examine whether the associations of clinical triggers for beginning active treatment varied by sociodemographic factors.”

Dr Kelly and his colleagues retrospectively studied 2,228 PCa patients in the Kaiser Permanente Northern California health system initially managed with observation. Of these, 27% switched to active treatment after a median follow-up of 2.9 years. Compared with non-Hispanic white men, non-Hispanic black men were 30% more likely to switch to active treatment, the investigators reported in The Journal of Urology (2016;196:734-740).

“While the current study may not be completely generalizable to the larger population of men with prostate cancer, it underscores the need to develop patient navigation tools for prostate cancer that are racially and culturally tailored to individual patients,” David F. Penson, MD, of Vanderbilt University in Nashville, Tennessee, wrote in editorial comments accompanying the new report.

Dr Penson noted that the patients in the study had relatively equal access to health care, eliminating some of the bias from prior studies, “allowing us to more accurately determine whether race independently influences receipt of active therapy.” 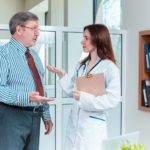