PSA doubling time (PSADT) among patients with castration-resistant prostate cancer (CRPC) strongly predicts their risk for metastatic disease and all-cause and cancer-specific mortality, according to a new study.

The study identified cut-points that can be used clinically for risk stratification of CRPC patients without metastatic disease.

A team led by Stephen J. Freedland, MD, of Cedars-Sinai Medical Center in Los Angeles, collected data on 441 men with non-metastatic CRPC receiving care at 5 Veterans Affairs hospitals from 2000–2015. The median follow-up period was 28.3 months. As a continuous variable, shorter PSADT was associated with an increased risk of metastasis, prostate cancer-specific mortality (PCSM) and all-cause mortality (ACM). A PSADT less than 3 months was associated with a nearly 9 times increased risk of metastases and PCSM and a 4.7 times increased risk for ACM compared with a PSADT of 15 months or more, Dr Freedland’s group reported online ahead of print in BJU International. The median times to metastasis were 9, 19, 40, and 50 months for patients with a PSADT of less than 3, 3–8, 9–14.9, and 15 months or more, respectively.

The investigators said their data suggest that scanning practices for detecting metastases should be risk-adapted incorporating PSADT, a concept previously proposed by the RADAR (Prostate Cancer Radiographic Assessments for Detection of Advanced Recurrence) group (Urology 2014;83:664-669).

The authors concluded that PSADT cut-points of less than 3, 3–8, 9–14.9, and 15 months or more are reasonable for risk stratification of patients with non-metastatic CRPC. In addition, these cut-points can be used for selecting high-risk men for clinical trials, they wrote.

A strength of the study was that it used PCSM as a clinical endpoint, the investigators stated, noting that previous studies examining PSADT did not. Death from prostate cancer “is the ultimate clinical endpoint that represents the aggressiveness of the disease and how well the disease was managed clinically,” they wrote.

With regard to study limitations, Dr Freedland and his colleagues pointed out that their study was observational, so they were limited to the PSA measurements available in the Veterans Affairs medical records for calculating PSADT. 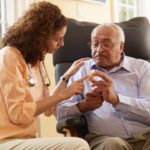