Radiation therapy (RT) directed at the primary prostate tumor in patients with newly diagnosed metastatic hormone-sensitive prostate cancer (mHSPC) is associated with a statistically and clinically significant improvement in overall survival (OS), according to a recent study.

Scott C. Morgan, MD, of The Ottawa Hospital Cancer Centre in Ottawa, Canada, and colleagues studied a cohort 410 patients with newly diagnosed mHSPC referred to a comprehensive cancer center from 2005 to 2015. Of these, 128 received prostate RT and 282 did not. All patients receive initial androgen deprivation therapy. The median follow-up duration was 61 months.

In addition, among patients who received prostate RT, OS improved along with increases in the biologically effective radiation dose. Each 10 Gy increase was significantly associated with a 13% decreased risk of death, according to the investigators.

“To our knowledge, this cohort represents the largest single-institution experience with primary tumor-directed RT in mHSPC reported to date,” Dr Morgan’s team wrote. “Receipt of prostate RT in this cohort was associated with a clinically significant improvement in OS.”

The authors noted that their cohort predated the debut of docetaxel and potent androgen receptor pathway inhibitors for use in mHSPC. “Whether the benefit of prostate RT in mHSPC will persist when used in addition to these therapies—or indeed, be enhanced by co-administration with these therapies—awaits the results of trials in progress.” 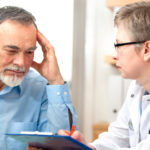