In the STHLM3-MRI trial (NCT03377881), 1532 of 12,750 men (12%) aged 50 to 74 years from the general Swedish population had PSA levels of 3 ng/mL or higher upon voluntary screening and were randomly assigned to undergo biparametric MRI followed by targeted and standard biopsy if imaging was suspicious for cancer (experimental biopsy group) or standard transrectal ultrasound biopsy alone (control group).

In an intention-to-treat analysis, clinically significant cancer of Gleason score 3+4 or higher was diagnosed in 21% of the experimental biopsy group and 18% of the standard biopsy group, Martin Eklund, PhD, of the Karolinska Institutet in Stockholm, Sweden and colleagues reported. Combined biopsy after positive MRI also reduced overdetection of clinically insignificant cancers with a Gleason score of 3+3 or lower compared with a standard biopsy approach: 4% vs 12%, respectively.

“In a trial of population-based screening by invitation, our results showed that among men with elevated PSA levels, combined biopsy performed only in men who had positive results on MRI was noninferior to standard biopsy for detecting clinically significant prostate cancer,” Dr Eklund’s team wrote. “The markedly reduced incidences of unnecessary biopsy and diagnosis of clinically insignificant cancer address key barriers impeding implementation of population-based screening for prostate cancer.”

The results support the use of standard biopsy in addition to targeted biopsy for men with positive MRI results, according to the investigators. They calculated that 1.7 clinically significant cancers would be missed for each clinically insignificant cancer avoided if MRI-fusion biopsy were used alone. They noted that the use of biparametric rather than multiparametric MRI might have influenced results.

With respect to adverse events, 2% of the experimental group and 4% of the standard group had infections requiring antibiotics. The hospitalization rate was 1% vs 3%, respectively. 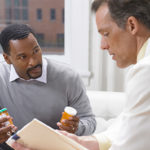