Prostate atrophy (PA) is commonly found in prostate biopsy specimens, but its clinical relevance is unknown. Now researchers have discovered a dose-dependent relationship between the extent of PA and lower risks of prostate cancer (PCa) that suggest practical applications.

In a novel study, Daniel M. Moreira, MD, of the University of Illinois at Chicago, and colleagues examined the percentage of prostate cores with atrophic changes after a negative biopsy (6 to 12 cores) for 3165 men aged 50 to 75 from the placebo arm of the REDUCE (Reduction by Dutasteride of PCa events) trial who had PSA values of 2.5 to 10 ng/mL. The investigators defined PA as reduced cytoplasmic volume of luminal epithelial cells and smaller glandular acini often with a single cell layer.

Regardless of PSA, men underwent a repeat transrectal ultrasound-guided prostate biopsy of 10 or more cores after 2 years. Those with PA involving 1%–25%, 26% –50, 51% –75%, and more than 75% of cores at baseline demonstrated 35%, 40%, 44%, and 65% lower odds of PCa, respectively, compared with men without histologic PA. Multivariate analyses confirmed an independent association between the extent of PA and lower PCa risk. In addition, those with PA in more cores had lower incidences of both low- (Gleason 2-6) and high-grade (Gleason 7-10) disease.

If the findings are confirmed, Dr Moreira and colleagues wrote, “the knowledge of PA can be used as a biomarker or incorporated in predictive models to decide whether and when a patient should undergo a repeat prostate biopsy.” They also observed that PA “could potentially be used to select patients at a low risk for disease progression in the active surveillance setting.”

The investigators considered several possible reasons for the findings. PA might be a marker of a hypogonadal state from androgen deprivation or low testosterone; it may correlate with larger prostate volume; or it might reflect selection bias of men with lower PSA. Adjustments for these factors did not mitigate the relationship, however.

With regard to study limitations, the researchers acknowledged that they did not evaluate the extent of atrophy within each core. They also could not assess relevant subtypes of PA, including proliferative inflammatory atrophy, postatrophic hyperplasia, and sclerotic atrophy. 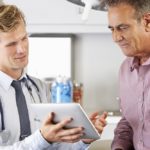