Higher serum creatinine levels that are still within normal ranges are associated with a significantly increased risk of prostate cancer, according to a new study.

Compared with patients in the lowest quartile of serum creatinine (1.02 mg/dL or below), those in the highest quartile (above 1.19 mg/dL) have a twofold increased risk of prostate cancer after adjusting for numerous potential confounders, according to a report in Cancer Epidemiology, Biomarkers & Prevention (2009; published online ahead of print).

Stephanie J. Weinstein, PhD, of the National Cancer Institute in Bethesda, Md., and colleagues analyzed data from male smokers who participated in the Alpha-Tocopherol, Beta-Carotene Cancer Prevention (ATBC) Study. The ATBC study included 29,133 male Finnish smokers aged 50 to 69 years who were recruited from 1985 to 1988. They were provided with alpha-tocopherol and/or beta-carotene supplements, or placebo, for five to eight years, and followed for up to nine years total..

Dr. Weinstein’s group selected 232 patients who were diagnosed with prostate cancer and who had serum samples available from baseline. Each case was matched with two controls.

In addition, among controls, serum creatinine was weakly yet significantly correlated with serum homocysteine, serum alpha-tocopherol, and serum retinol. It was also significantly higher among controls who lived in urban rather than rural areas, among those with no reported history of diabetes, and among subjects assigned to receive the alpha-tocopherol supplement. Serum creatinine concentrations did not differ by stage at diagnosis or by time to diagnosis among cases.

To address the possibility that undiagnosed prostate cancer led to elevated baseline serum creatinine, the researchers stratified subjects according to follow-up time. They found no meaningful difference in the association when either the earlier or later cases were excluded from analysis.

“Additional studies are needed to retest the hypothesis, determine whether the association is evident in nonsmokers and in other racial groups, and explore potential mechanisms, including any interaction with serum PSA,” the researchers concluded. 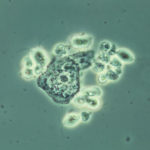