Local treatment failure following radiation therapy for intermediate- and high-risk prostate cancer independently predicts an increased risk for development of distant metastases, but in most cases, metastases occur without detectable local recurrence, according to a recently published meta-analysis.

The latest findings, published in European Urology, could help better guide clinicians and their patients with aggressive cancers who appear to have a reasonable chance of harboring micrometastatic disease even at diagnosis. The findingssuggest that local treatment may need to be integrated into a multimodality plan that includes systemic therapy, according to investigators.

The meta-analysis included pooled data from 6245 men with intermediate-risk and 6288 with high-risk prostate cancer enrolled in 18 randomized trials. The trials were conducted from 1985 to 2015 within the Meta-analysis of Randomized Trials in Cancer of the Prostate Consortium. The median follow-up was 11 years.

“A local failure may not mechanistically lead to most distant metastases, but it is a poor prognostic factor and there certainly are a subset of distant metastases in later years that appear subsequent to a local failure,” said corresponding author said Amar U. Kishan, MD, Chief of the Genitourinary Oncology Service for the Department of Radiation Oncology at the David Geffen School of Medicine at UCLA and the UCLA Jonsson Comprehensive Cancer Center in Los Angeles, California. “So for high-grade cancers at least, an optimization of local and systemic therapy is important. However, local therapy intensification should not be pursued at the expense of systemic therapy intensification.”

Dr Kishan said the current study largely confirms a prior analysis by his team of 6 trials that focused on high-grade prostate cancer. “This was a much larger effort, including many more patients and trials, and therefore help establish the patterns of failure we document as a recurrent theme in prostate cancer natural history,” he said.

In both groups, ADT significantly decreased the local failure rate from a cRF state (6.2% vs 7.8% for intermediate-risk patients and 11% vs 20% for high-risk patients). These data show that the vast majority of distant metastases develop without a preceding clinically detectable local failure, Dr Kishan said.

Dr Kishan’s team acknowledged limitations of their analysis, including the small size of some treatment subgroups. In addition, the included studies exhibited heterogeneity in the definition of local failure and distant metastases. “Some trials did not specific the definition, while some were reliant on digital rectal examination to determine the local failure status.”

Judd W. Moul, MD, of the Division of Urologic Surgery at the Duke Cancer Institute in Durham, North Carolina, said these findings are clinically relevant because they represent a large cohort of patients from numerous prior RCTs with long-term follow-up. “All the patients in this meta-analysis were treated in the pre-PET scan era of staging,” Dr Moul said. “As more and more newly diagnosed high risk men receive PET imaging for initial work-up, the management of prostate cancer will change to more up-front treatment intensification.”

Glenn Bauman, MD, a professor in departments of oncology and medical biophysics at the Western University’s Schulich School of Medicine and Dentistry in London, Ontario, Canada, said there has been considerable investigation into safely escalating radiation doses to the prostate based on the hypothesis that improved local control will ultimately improve survival by reducing metastases from persistent disease in the prostate. “This has been a difficult question to answer, and the current paper is a very important exploration of this issue and the conclusion that there is a need to optimize both local and systemic control is an important message,” Dr Baumann said.

These findings can now be coupled with modern imaging for designing boosted doses to the prostate that may improve outcomes. Current clinical trials may offer even greater insights into disease progression through more rigorous imaging.

“PSMA PET/CT or other molecular imaging techniques might allow us to better understand patterns of failure and correlate with dose response as well as better identify men upfront who need intensified systemic therapy or intensified locoregional treatment, Dr Bauman said.” 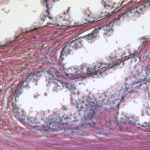