Men who achieved fatherhood through assisted reproduction are at increased risk for early onset prostate cancer (PCa), according to new study results published in The BMJ.

Nearly 1.2 million men in Sweden fathered a first born child during 1994 to 2014, including 97% by natural conception, 1.7% by in vitro fertilization (IVF), and 1.3% by intra-cytoplasmic sperm injection (ICSI). More men utilizing IVF and ICSI (0.37% and 0.42%, respectively) were diagnosed with PCa than men who fathered children naturally (0.28%). ICSI and IVF were associated with a significant 64% and 33% increased risk of PCa, respectively, compared with unassisted conception, Yahia Al-Jebari, a PhD candidate at Lund University in Sweden, and colleagues, reported.

The average age at PCa onset was 55.9, 55.1, and 57.1 years for men fathering by IVF, ICSI, and unassisted means, respectively. But men utilizing ICSI or IVF had 86% and 51% higher risks for PCa onset before age 55. With respect to disease severity, PCa patients who conceived through ICSI were nearly twice as likely to receive androgen deprivation therapy as those conceiving naturally. Men with any previous cancer or testosterone replacement therapy were excluded from study. The team adjusted for patient age and education.

“Men who achieved fatherhood through assisted reproduction techniques, particularly through ICSI, are at increased risk for early onset prostate cancer and thus constitute a risk group in which testing and careful long term follow-up for prostate cancer may be beneficial,” Al-Jebari’s team concluded.

According to the investigators, it may be the underlying level of male infertility that is associated with PCa.

In an accompanying editorial, Aditi Sharma, MBBCh, and Channa Jayasena PhD, of Imperial College and Hammersmith Hospital in London, suggested microdeletions in the Y chromosome, which are known to cause severe male infertility, and genes on the Y chromosome associated with PCa as a possible link.

“In the absence of a plausible mechanism of action or proof of causation, justifying screening for prostate cancer in all infertile men is difficult,” Drs Sharma and Jayasena wrote. “However, further research on the possible future complications of male infertility would be welcomed by patients and will help clinicians to counsel all infertile men about their future health.” 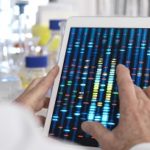