Men aged 60 years or older who have elevated triglyceride levels are at increased risk of being diagnosed with prostate cancer (PCa), according to Japanese investigators. They also are more likely to be diagnosed with aggressive PCa.

Norihiro Hayashi, MD, and collaborators at Jikei University School of Medicine, Minato-ku, Tokyo, analyzed data from 905 men who underwent prostate biopsies. Of these, 528 (58.3%) had cancer on biopsy. 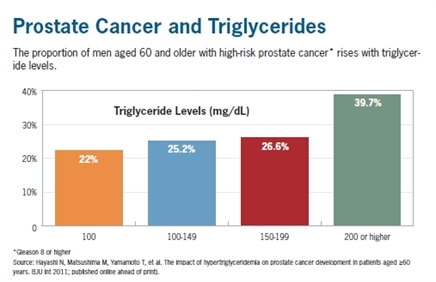 Additionally, among men aged 60 years and older, statin users had a significant 44% decreased risk of high-risk PCa compared with nonusers, after adjusting for age and body mass index.
High triglyceride levels correlated significantly with high BMI. In addition, compared with subjects who had a BMI below 23 kg/m2, those with a BMI of 25 or higher had a nonsignificant 41% increased risk of a prostate cancer diagnosis.

The researchers explained that potential mechanisms for the association between hypertriglyceridemia and cancer development include insulin resistance, infection, inflammation, and oxidative stress.

The new study adds to mounting evidence linking PCa to metabolic and lipid abnormalities, said Stephen J. Freedland, MD, a researcher at the Duke Prostate Center and Associate Professor of Surgery (Urology) and Pathology at Duke University Medical Center in Durham, N.C. He and his colleagues recently reported on a study showing that obesity is associated with an increased risk of high-grade PCa.

Dr. Freedland explained that, unlike cholesterol, triglyceride levels are highest among those with insulin resistance, and many physicians consider high triglycerides as a sign of a problem with blood sugar levels. In the new study, individuals with high BMI had a nonsignificant elevated PCa risk, and high BMI is associated with high cholesterol and insulin resistance, both of which have been linked to PCa risk in previous studies, Dr. Freedland said. He said the new findings add to a growing consensus that metabolic disturbances and especially insulin are associated with promoting the growth of prostate tumors, especially aggressive PCa.

Clearly, men who are obese and have metabolic syndrome are at increased PCa risk, Dr. Freedland said, but whether losing weight and no longer meeting criteria for metabolic syndrome changes that risk is not known. “Intuitively, the answer should be ‘yes.’ It makes sense, but we as a prostate cancer community have not shown that, yet.”

PSA Testing: Why the U.S. and Europe Differ