Results of a small study of men with nonmetastatic castrate-resistant prostate cancer (CRPC) characterized by lymph node-only recurrence suggest that times to biochemical recurrence and radiological recurrence may be shorter for those treated with salvage lymph node dissection compared with androgen deprivation therapy (ADT). The findings from this study were published in Urologic Oncology.

Options for the management of patients with nonmetastatic CRPC, characterized by a progression of prostate-specific antigen (PSA) level in the absence of metastatic disease (ie, biochemical recurrence), include ADT and observation. There is also recent evidence that these patients may benefit from novel nonsteroidal antiandrogen therapies. However, improvements in imaging modalities, such as positron emission tomography (PET) scanning, have increased the likelihood that low-volume metastatic disease, such as nodal metastases, will be detected in these patients.

This retrospective study involved a comparison of the clinical outcomes of 2 cohorts of patients who were diagnosed with nonmetastatic CRPC while receiving ADT — both of which included patients with disease characterized by “surgically-amenable” lymph node metastases only following radical prostatectomy, and who were subsequently treated with either ADT or salvage lymph node dissection at the Mayo Clinic in Rochester, Minnesota, between 2010 and 2016.

Of the 45 patients included in the study, 23 and 22 underwent salvage lymph node dissection or received ADT, respectively. Baseline characteristics of the 2 groups were similar, except that patients undergoing salvage lymph node dissection had a lower mean age (55.8 years vs 60.3 years), a lower likelihood of having a retroperitoneal lesion (21.7% vs 63.6%), and a longer mean PSA doubling time prior to nodal recurrence (1.08 vs 0.6 years) compared with those receiving ADT.

In their concluding remarks, the study authors urged that “larger prospective studies should investigate the role of salvage lymph node dissection in nonmetastatic CRPC patients with nodal recurrence to further corroborate our preliminary findings.” 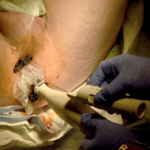 Transperineal Prostate Biopsy May Be a Safer Alternative