Adding apalutamide to abiraterone and prednisone improved radiographic progression-free survival (rPFS) in patients with metastatic castration-resistant prostate cancer (mCRPC), according to a study published in The Lancet Oncology.

The proportion of patients who reached undetectable prostate-specific antigen (PSA) concentrations at any time during treatment was significantly higher in the apalutamide arm than in the placebo arm — 25% and 19%, respectively (HR, 1.28; 95% CI, 1.01-1.62; P =.040).

On the other hand, there were no significant differences in median time to PSA progression, overall response rate, or overall survival.

“The ACIS study highlighted potential long-term clinical benefits associated with the combination of apalutamide and abiraterone-prednisone in clinical subgroups of patients,” the researchers wrote. “However, these results require further exploration.”

Disclosures: This research was supported by Janssen Research & Development. Some study authors declared affiliations with biotech, pharmaceutical, and/or device companies. Please see the original reference for a full list of disclosures. 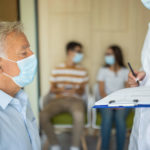