Hip fractures are common among low-risk prostate cancer (PCa) patients who have been treated with androgen-deprivation therapy (ADT), according to a Finnish study published online in the Scandinavian Journal of Urology.

Antti Kaipia, MD, of Satakunta Central Hospital in Pori, Finland, and colleagues conducted a retrospective study of 1,210 men treated for proximal femoral fractures at Tampere University Hospital from 1998 to 2008. Of these men, 133 had a prior PCa diagnosis. 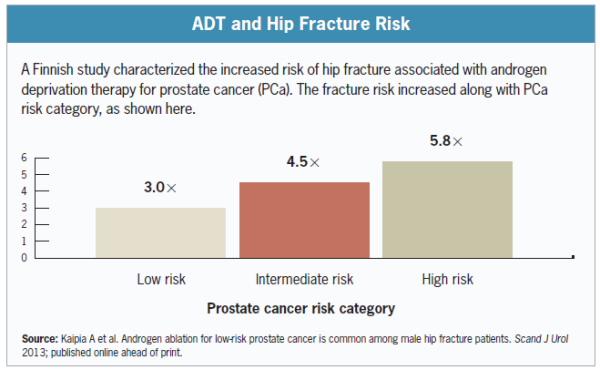 The researchers found that 117 of the PCa patients had been treated with ADT at some point during their course of treatment, and 113 were still undergoing ADT at the time of the fracture. The median time between PCa diagnosis and fracture was 4.6 years. ADT and age were found to be major risk factors for fractures in all patients. In multivariate analyses, ADT use was associated with a 3.0, 4.5, and 5.8 times increased risk of hip fracture among men with low-, intermediate-, and high-risk PCa, respectively.

Nearly one quarter of the fracture patients with PCa had well-differentiated T1-2 PCa, and more than 50% had low PSA values (less than 1 ng/mL) at the time of the fracture.

“These figures indicate that a large portion of these fractures might have been avoided by a more cautious attitude towards ADT and by using antiosteoporotic medication,” they wrote.

The researchers also observed: “A surprisingly large proportion of the patients suffering a fracture had been treated with primary ADT despite having a local, low-risk prostate cancer. It was thus likely that the liberal use of ADT gave these patients a risk comparable to that of the cancer itself.”

Although previous studies have looked at the rate of hip fractures in PCa patients, the investigators believe that theirs is the first to look exclusively at a fracture population with PCa diagnosis.

In background information provided in their journal report, Dr. Kaipia’s group cited previous research showing that decreases bone mineral density with ADT occur in a time-dependent manner, and long-term use may lead up to a 45% increase in the relative risk of a fracture. “The association of risk between hip fractures and ADT is of great importance because hip fractures are associated with a significant risk of death,” they wrote.