All forms of androgen deprivation therapy (ADT) for prostate cancer are significantly associated with an increased risk for bone fracture, according to a recent population-based study published in PLoS ONE. The risk is highest among men who undergo orchiectomy.

An analysis of 2001-2008 data from the Taiwan National Health Insurance Research Database showed that patients who received injectable formulations of ADT (gonadotropin-releasing hormone agonists and antagonists) had a significant 55% increased risk of bone fracture compared with a matched control group without cancer after adjusting for multiple variables. Men who underwent orchiectomy and those who took oral antiandrogens had a significant 95% and 37% increased risk, respectively.

The study also demonstrated that older age and various comorbidities, including stroke, heart failure, and pulmonary and renal disease, significantly increased the risk of fracture in men with prostate cancer. Stroke, heart failure, pulmonary disease, and renal disease increased the risk of fracture by 15%, 24%, 22%, and 33%, respectively. 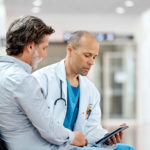