High blood levels of vitamin D may increase a man’s risk of prostate cancer (PCa), according to a new study.

The finding, by Demetrius Albanes, MD, and colleagues at the National Cancer Institute (NCI) in Bethesda, Md., contrasts with a body of experimental and limited epidemiologic evidence suggesting that vitamin D protects against the development of this and other malignancies.

Vitamin D has been shown to inhibit prostate cells in vitro and studies have shown that PCa incidence is higher among men in higher latitudes, where they are exposed to less ultraviolet radiation from sunlight and consequently have less vitamin D produced in the skin.

“What we don’t have as yet is a preponderance of evidence showing that men who have higher vitamin D status have lower prostate cancer risk,” said Dr. Albanes, Senior Investigator and an Acting Chief of NCI’s Nutritional Epidemiology Branch.

Dr. Albanes’ group measured blood levels of 25-hydroxyvitamin D—a reliable biomarker of vitamin D status—in 1,000 PCa patients (cases) and 1,000 matched controls who were cancer free at the time of the case patients’ cancer diagnosis. All subjects had participated in the Alpha-Tocopherol, Beta-Carotene Cancer Prevention (ATBC) Study, which was conducted in Finland.

Compared with subjects in the first quintile of 25-hydroxyvitamin D blood levels, subjects in the fourth and fifth quintiles had a significant 26% and 56% increased risk of PCa, respectively, after adjusting for season of blood collection, the researchers reported in Cancer Epidemiology, Biomarkers & Prevention (published online ahead of print). 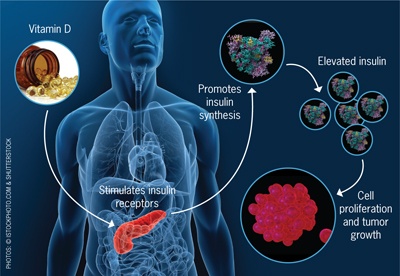 At study entry, cases and controls had similar average 25-hydroxyvitamin D levels (although 3% higher among cases) and with the exception of being more likely to have a positive family history of PCa, did not differ substantially with respect to other characteristics, including history of diabetes and leisure time physical activity. The median follow-up time to PCa diagnosis was 12.6 years; controls had a median observation time of 17.5 years.

Age, smoking intensity or duration, body mass index, family history of prostate cancer, history of diabetes had no effect on the association between vitamin D levels and PCa risk.

In an interview with Renal & Urology News, Dr. Albanes speculated about how higher 25-hydroxyvitamin D levels could increase PCa risk. One possibility is that higher levels of this form of vitamin D displaces the more bioactive hormonal form (1,25-dihydroxyvitamin D) from the primary vitamin D transport molecule in blood (vitamin D binding protein), so it is less available to prostate cells, he said. In addition,

vitamin D stimulates insulin receptors and promotes insulin synthesis, and studies have linked elevated insulin levels with a higher risk of PCa as well as pancreatic cancer. Therefore, higher vitamin D levels could promote cell proliferation and tumor growth in both organs through hyperinsulinemia. The strong association between higher vitamin D levels and aggressive disease would be consistent with a stimulatory effect on tumor growth, he noted.

Clinicians should “not to act on the assumption that more vitamins and megavitamin doses are necessarily always going to be beneficial,” Dr. Albanes said. They should monitor the research and base their use of vitamin D supplements in men on currently available evidence. For now, he said, doctors should be cautious in recommending high-dose vitamin D supplementation to men.

Dr. Albanes’ team noted that their study was limited by the inclusion of only Caucasian men who smoked. They also pointed out that their ability to find a protective effect of vitamin D may have been limited by the study population’s relatively low vitamin D levels—owing at least in part to the high latitude of the study location—and a paucity of blood samples collected in the summer, when blood vitamin D levels would be higher than in other seasons.

“The results of this study add to existing observations that higher levels of serum vitamin D increase an individual’s risk of prostate cancer,” said Eric A. Klein, MD, Chairman of the Glickman Urological and Kidney Institute at Cleveland Clinic. “The authors appropriately, therefore, advise caution on the routine use of vitamin D supplements because doing so may actually be harmful. This suggestion is in line with many other studies showing that for healthy individuals who eat a normal diet, adding micronutrients adds no benefit and may be harmful.”

For example, Dr. Klein observed, the ATBC study, on which the new study is based, showed that beta carotene actually increases the risk of getting lung cancer. Another study called CARET showed that subjects taking beta carotene and vitamin A had higher risks of lung cancer and were more likely to die of cardiovascular disease (CVD), he said. In addition, researchers have demonstrated an increased risk of colon polyps with the use of high-dose folate supplements, and most studies of vitamin E have shown no benefit in preventing prostate or other cancers, CVD, or overall survival, Dr. Klein said.

“Together, these observations underscore the need for consumers and health care providers to use caution in using or recommending unregulated over-the-counter products unless clinical trials show they are beneficial,” Dr. Klein said.