Adding metastasis-directed therapy (MDT) with radiation to intermittent hormone therapy for oligometastatic prostate cancer improves outcomes and allows for greater time off hormone therapy, investigators reported at the 2022 Annual Meeting of the American Society for Radiation Oncology (ASTRO). Results suggest that this approach has the potential to improve patients’ quality of life (QOL).

The finding is from the phase 2 EXTEND study, the first randomized trial to evaluate MDT with hormone therapy in oligometastatic prostate cancer. Investigators randomly assigned 87 patients with 5 or fewer metastases to receive MDT plus hormone therapy (43 patients) or hormone therapy alone (44 patients). All patients underwent a hormone break 6 months after randomization. During a median follow-up period of 22.1 months, 41 patients experienced disease progression. The median PFS was not reached in the combination arm compared with 15.8 months in the hormone monotherapy group. Adding MDT to hormone therapy was significantly associated with a 75% decreased risk for disease progression.

Men received hormone therapy for at least 2 months before starting the trial, and each stopped hormone therapy for a planned break 6 months after they started. Patients restarted hormone therapy at the time of disease progression. Hormone therapy consisted of a luteinizing hormone-releasing hormone agonist/antagonist with or without a second-generation androgen-receptor targeting agent. As a primary secondary endpoint, MDT significantly improved time from recovery of eugonad testosterone levels (above 150 ng/dL) to progression (median not reached vs 6.1 months in the monotherapy arm).

The investigators observed grade 3 toxicities in 3 patients in each study arm.

“The main weakness [of the study] is that is a relatively small study and there is heterogeneity; however, despite this heterogeneity we saw a large significant difference that did not seem to vary substantially among important subgroups” Dr Tang said. “For urologists, the take-home point is that with careful management using radiation and hormone therapy there exists the potential to convert metastatic prostate cancer, initially diagnosed with oligometastatic disease, to a chronic disease treatable with intermittent treatments that maintain QOL.”

Gerald L. Andriole, MD, Professor of Urology and Director of Urology for the National Capital Region of the Johns Hopkins Medicine’s Brady Urological Institute, said the trial was well conducted and provides further evidence that MDT appears to be beneficial for men with oligometastatic PCa. In addition to prolonging PFS, the MDT group spent more time off of intermittent hormone therapy, with longer intervals of normal testosterone levels, which should translate into better overall QOL.

Howard Sandler, MD, Chair of the Department of Radiation Oncology at Cedars-Sinai in Los Angeles, California, and president-elect of ASTRO, noted that the current study shows a substantial delay in time to progression with MDT. “I was surprised pleasantly with the magnitude of the effect,” Dr Sandler said. “Delaying progression is clinically meaningful to prostate cancer patients since progression leads to more hormone therapy or other impacts of cancer dissemination.”

This type of study is highly valued because it is randomized, but more research is warranted. “In this exact space, it would be nice to see patient reported QOL outcomes to confirm that QOL was improved with MDT,” he said. “Also, more information on the immune system impact by MDT would be interesting regarding the potential mechanism of action of MDT in delaying progression.” 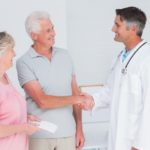