Mental health issues (MHI) develop in one-fifth of elderly men with localized prostate cancer (PCa), with those who undergo radical prostatectomy or radiotherapy at lower risk for MHI than those on watchful waiting, according to a new study.

The study, by Praful Ravi, MBBChir, of Imperial College Healthcare NHS Trust, London, and colleagues, included 50,856 men aged 65 years or older with localized PCa diagnosed from 1992 to 2005 and without a mental illness diagnosis at baseline. MHI developed in 10,389 patients (20.4%) during the study period, the investigators reported online ahead of print in Urologic Oncology.

Compared with men aged 65–69 years, those aged 75 years or older had a significant 29% increased risk of MHI, such as anxiety, major depressive disorder, and neurotic depression. Compared with patients who had a Charlson comorbidity index of 0, those with an index of 1, 2, or 3 or more had a significant 23%, 39%, and 63% increased risk, respectively. 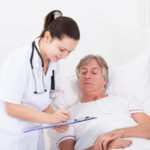