Prostate specific antigen (PSA) screening was widely adopted almost 30 years ago, and while it has benefited many men, it still has inherent drawbacks. Limitations in sensitivity have led to unnecessary prostate biopsies and the detection of clinically insignificant prostate cancer (PCa). PSA screening began in the 1990s, causing an increased incidence of PCa as more men were diagnosed with earlier stage disease.1 One side effect of screening was the diagnosis of more low-risk and often indolent disease that resulted in overtreatment and subsequent increased morbidity. Due to the potential harm from overtreatment, and the conflicting results seen in two major screening trials, the United States Preventive Services Task Force (USPSTF) gave PCa screening a “D” recommendation in 2012. 2-4 The net result was decreased overall screening, with a 7.5% reduction in the incidence of localized PCa but a 1.4% increase in the incidence of metastatic disease. 5 The USPSTF’s 2012 decision was disputed as both physicians and their patients found this recommendation to be controversial. Individual screening practices have continued, although the practices are highly varied.6,7 In 2017, the USPTSF released a preliminary grade “C” recommendation, citing a plethora of reasons for physicians to discuss screening with appropriate candidates.8 These reasons included the European Randomized Study of Screening for Prostate Cancer (ERSPC) trial’s finding of a continued benefit from screening in those aged 55–69 years, increased use of active surveillance to mitigate the risk of overtreatment, and the need for screening in those most at risk for PCa, such as African Americans and men with a family history of PCa. The controversy and confusion among both physicians and patients concerning PSA screening underscores the need for a better method to screen for PCa.

Although mpMRI of the prostate represents a clinically useful imaging modality that allows physicians to visualize suspicious lesions in the prostate, it has inherent limitations, such as difficulty visualizing small tumors (<0.5 mL) and frequently underestimating the size of lesions. Still, mpMRI remains a powerful diagnostic tool. A meta-analysis of studies looking at the accuracy of mpMRI in detecting PCa found a 44%–87% sensitivity and a negative predictive value of 92%–94%. 9-11 Being able to better visualize lesions within the prostate led to the development of fusion biopsy platform systems, allowing urologists to merge real-time ultrasound (US) and previously cached mpMRI images to target suspicious lesions more easily. Using this approach, a prospective study involving 1003 men by Siddiqui et al. compared systematic biopsies to fusion-guided biopsies and found agreement between biopsies in 69%.12 More importantly, there was a 17% decrease in the detection of clinically insignificant (CI) disease with a simultaneous significant 30% increase in the detection of high-risk disease.12 A meta-analysis of multiple studies comparing transrectal US (TRUS)-guided biopsies to MRI fusion biopsies reported similar overall rates of PCa detection, but fusion biopsies had better sensitivity (91%) for detecting significant PCa while avoiding low-risk PCa almost two times better than TRUS-guided biopsies. 13 Additionally, targeted biopsies have been shown to perform better than transrectal ultrasound (TRUS) biopsies at all ranges of PSA. 14 In a study by Shakir et al. of both biopsy-naïve men and men with prior negative biopsies, targeted biopsies upgraded systematic biopsies in all ranges of PSA, with its rate of upgrading increasing as PSA increased.15 Multiple studies have shown the benefit of mpMRI/US fusion biopsies over TRUS biopsies alone, including the improvement in the diagnosis of clinically significant disease. This technique allows urologists to further respond to the criticisms the USPSTF originally generated in 2012.

While the utility of mpMRI to guide and improve biopsies already has been demonstrated, its role in screening for PCa has not reached a consensus. With this in mind, the PROMIS trial set out to determine if mpMRI was superior to TRUS-guided systematic 12-core biopsies for the detection of significant PCa after initial screening with PSA. This multicenter study enrolled 576 biopsy-naïve men with suspicion for cancer based on elevated PSA, abnormal digital rectal examination or family history. After enrollment, all patients received a 1.5 Tesla mpMRI with both standard 10-12 core TRUS biopsy and template prostate mapping (TPM) core biopsies every 5mm as their gold standard for cancer detection.16 When looking at the TPM biopsies in this cohort, the overall cancer detection rate (CDR) was 71% (408 men). To determine sensitivities and specificities for both mpMRI and TRUS biopsies, the authors defined clinically significant cancer in multiple ways: Gleason Score (GS) ≥ 4+3 or cancer core length ≥ 6 mm (n=230), GS ≥ 3+4 or cancer core length ≥ 4 mm (n=331), or any GS ≥ 3+4 (n= 308).16 Significant differences were seen in the predictive abilities when comparing mpMRI with TRUS biopsies, the current standard of care. Sensitivities and specificities for mpMRI to detect CS disease ranged from 87%–93% and 41%–47% compared with 48%–60% and 96%–99% with TRUS biopsy, respectively. Negative (NPV) and positive predictive values (PPV) for clinically significant disease using mpMRI as a screening tool ranged from 72%–89% and 51%–69%, respectively, with the highest NPV seen when using the most stringent definition of clinically significant disease (GS ≥ 4+3).16 When comparing these values to TRUS biopsy, NPV and PPV ranged from 63%–74% and 90%–99%, respectively.16 This study demonstrated the clear advantage of mpMRI to rule out clinically significant disease, especially as the criteria for significance increased. All of this implies that screening mpMRI could potentially avert needless biopsies. These authors predicted that if only those men with positive imaging findings (Likert score ≥ 3) underwent biopsy, 158 (27%) men would be spared a biopsy.16 Additionally, there would be a 5%–21% reduction in clinically insignificant cancers detected and an increase in the detection of significant cancers of up to 18%, assuming mpMRI led to fusion biopsies with similar cancer detection rates as template mapping.16

Additional studies have looked at the NPV of mpMRI. In a study of 100 histologically mapped radical prostatectomy specimens, 99/100 patients had lesions identified on preoperative mpMRI. 10 However, when looking at the specimens on a per lesion basis, 26 (16%) of total lesions (all GS ≥ 3+4) were missed.10 Another study, by Rais-Bahrami et al., evaluated the clinical utility of mpMRI as an adjunct to PSA screening and found that compared with PSA alone, the addition of mpMRI increased the area under the curve (AUC) from 0.66 to 0.80 when detecting PCa of any GS in biopsy-naïve men.17 With concern from both the USPSTF and urologists about the lack of sensitivity of PSA screening, the addition of the mpMRI has become a valuable test to increase sensitivity and thus address this concern.

Sparing men from unnecessary prostate biopsies will avoid complications that can come with the procedure as well as avoiding the diagnosis of low-grade disease. Therefore, by avoiding biopsy, men will not be placed at risk for common morbidities of prostate biopsies (eg, hematuria, perineal/rectal discomfort or urinary retention) and potentially fatal infectious complications, such as sepsis. A study published in 2011 by Steensels et al. found that when compared to the prior 6 years data, their incidence of fluoroquinolone-resistant Escherichia coli increased to 22% and their rate of hospitalization for infectious complications had tripled to 3%.18 Adverse events were seen in only 44 men, with 8 (1%) cases of sepsis and 58 (10%) episodes of urinary retention.

With prostate mpMRIs, urologists have a powerful tool to guide not only when to biopsy, but also where to biopsy. Despite providing greater accuracy in detecting cancer lesions, there is a debate about when and how to incorporate mpMRI into clinical practice due to the upfront cost of mpMRI. Currently, mpMRI and fusion biopsy are recommended by experts in both urology and radiology for patients with a previous negative systematic biopsy and continued rising PSA or suspicion of PCa.19 The biggest downside to screening mpMRI is the cost. Many urologists and health care policy experts have questioned whether an initial mpMRI will be more cost-effective or not in finding more clinically significant cancer and avoiding the continual and unnecessary workup of missing cancer. Faria et al. used the CDR of both clinically significant and insignificant disease of a cohort within the PROMIS trial to look at both the short- and long-term costs of upfront mpMRI for patients with an elevated PSA. 20  Using these patients, cost and quality of life modeling was applied to determine the most cost-effective strategy per quality of life year.20 Predicted outcomes and costs of localized and metastatic disease were estimated based on data in the PIVOT and STAMPEDE trials.20-22 Multiple sequencing pathways of mpMRI and biopsy were modeled to maximize the CDR of clinically significant disease while also limiting costs. When maximizing quality of life years (QALY) per unit price, the analysis determined that obtaining an upfront mpMRI and up to 2 fusion biopsies afterward was most cost-effective. Using this algorithm, 85% of all clinically significant tumors would be diagnosed. This cost analysis is similar to another modeling study by de Rooij et al. These authors examined the cost of the initial and continued workup of a hypothetical patient with an elevated PSA (> 4 ng/mL) and any subsequent treatment for PCa while assuming they had an upfront mpMRI with fusion biopsy versus a standard workup using systematic TRUS biopsy.23 This study found an almost similar cost between upfront mpMRI and standard TRUS biopsy (€2423 vs. €2392).23 However, when adjusting for QALY, upfront mpMRI was more cost-effective. 23

Another hindrance to widespread prostate mpMRI use in screening is the need for the dedicated training of both radiologists and urologists to be able to accurately perform and interpret the mpMRI. Specialized training is needed to correctly obtain quality MR images, determine index lesions, and Gleason scores, as well as develop increasing confidence in identifying specific tumor locations within the prostate. 24 Variability among inexperienced readers can be seen when patients are referred to tertiary care centers with dedicated uroradiologists. A study by Hansen et al. showed that disagreement between centers occurred 54% of the time.25 More experienced uroradiologists reduced the over-reading of lesions, and this improved both the NPV and PPV of the mpMRI.25 Fortunately, after dedicated training to interpret mpMRI, inter-observer agreement is good and improves further with the use of the Prostate Imaging and Reporting Data Systems, version 2 (PI-RADSv2) scoring system.26 This reliability in reporting is evidenced in the PROMIS trial, which had an 80% inter-observer agreement between mpMRI reports.16

Although experts already recommend mpMRI for patients with a continued suspicion of cancer and a previous negative biopsy, there appears to be tremendous benefits associated with incorporating mpMRI into PSA screening for biopsy-naïve patients. At the same time, urologists will avoid over-diagnosing and treatment of low-grade PCa and will also avoid procedural complications by reducing TRUS biopsies. The results of the PROMIS trial show that mpMRI significantly outperforms systematic biopsies in the ability to rule out clinically significant disease. Upfront mpMRI not only can rule out high-grade disease in the majority of men and spare them unnecessary biopsies, but men with evidence of PCa can undergo targeted MRI/US fusion biopsy with better accuracy than standard TRUS. The argument against upfront mpMRI has always centered on cost. However, after factoring in the cost of missed high-grade disease, multiple modeling studies have now shown that when adjusting for quality of life, upfront mpMRI is more cost-effective. These studies demonstrate the supporting evidence for incorporating mpMRI into the screening protocol for patients with an elevated PSA or suspicion for PCa for better diagnosis both before and during a targeted biopsy. Negative mpMRIs should discourage prostate biopsy due to the low yield for significant disease and to avoid the increasing rate of infectious complications.

5.         Houston KA, King J, Li J, Jemal A. Trends in prostate cancer incidence rates and prevalence of prostate-specific antigen screening by socioeconomic status and regions in the US, 2004-2013. J Urol. 2017; published online ahead of print.

26.       Purysko AS, Bittencourt LK, Bullen JA, et al. Accuracy and interobserver agreement for Prostate Imaging Reporting and Data System, Version 2, for the characterization of lesions identified on multiparametric MRI of the prostate. AJR Am J Roentgenol. 2017;209:339-349. 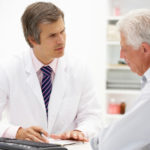