Black men with clinically localized prostate cancer (PCa) initially managed with active surveillance are more likely than non-black men to have higher-risk disease at radical prostatectomy (RP), according to a new study published online ahead of print in The Journal of Urology

The study findings support the hypothesis that black race itself is an influential factor in PCa progression. Previous studies offered conflicting results because race often could not be investigated apart from complicating factors such as low income and comorbidity burden.

Robert Aboussaly, MD, MS, of University Hospitals Case Medical Center in Cleveland, and colleagues queried the robust and nationally representative National Cancer Data Base, which captures 70% of new cancer diagnoses in the United States. Of 48,473 American men with clinically low-risk PCa (clinical stage T2a or below, Gleason score 6 or below, and PSA level below 10 ng/mL), 5411 (11.2%) were black. Patients transitioned from active surveillance (AS) and underwent RP from 2010 to 2013. The selected endpoints were pathologic upgrading to Gleason scores above 6 (primary) or above 7 (secondary) and/or upstaging to pathological T3 or 4 or N1 disease.

Black men had 20% greater odds of upgrading at RP to Gleason score above 6 and/or upstaging. In addition, black race independently predicted upgrading to Gleason score above 7 and/or upstaging. Results held after stratification and multivariable modeling accounting for important confounders, including patient age at diagnosis, Charlson-Deyo comorbidity index, income, urban residence, clinical stage, pathological grade, percentage of positive biopsy cores, and pathologic stage. The investigators were unable to adjust for family history of PCa. They also could not analyze long-term oncologic outcomes, which is a limitation.

Black men with clinically low-risk PCa “are more likely to harbor higher-risk disease, which may lead to adverse outcomes,” Dr Aboussaly and colleagues concluded. “By itself, this finding does not preclude active surveillance; however, race should be considered as men weigh the risks and benefits of active surveillance versus treatment.” 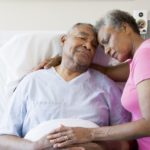