Detection of a certain messenger RNA variant called AR-V7 in circulating tumor cells (CTCs) in men with advanced prostate cancer may be associated with resistance to enzalutamide and abiraterone, according to a new study.

“This conceptually simple model is biologically plausible, because the protein encoded by AR-V7 lacks the ligand-binding domain of the androgen receptor (the direct target of enzalutamide and the indirect target of abiraterone) while remaining constitutively active as a transcription factor in a ligand-independent manner,” the investigators wrote in The New England Journal of Medicine (2014;371:1028-1038).

A team led by Emmanuel S. Antonarakis, MD, of Johns Hopkins University in Baltimore, noted that a proportion of men do not benefit from enzalutamide and abiraterone and that a clearer understanding of the mechanisms underlying resistance to these medications would facilitate selection of alternative therapies, such as chemotherapies, for these men. 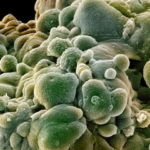