PSA levels greater than 0.09 ng/mL can predict prostate cancer (PCa) overall survival, risk of metastasis, and other outcomes as early as 3 months following radiation and androgen deprivation therapy (ADT), according to a new retrospective analysis.

In the study, published in Radiotherapy and Oncology, Michael Zelefsky, MD, of Memorial Sloan Kettering Cancer Center in New York, and colleagues reviewed PSA levels among 2566 patients with intermediate and high-risk PCa treated with radiation and ADT from 1990 to 2012. Of them, 1275 had baseline PSA levels less than 20 ng/mL and had information on PSA levels available post-therapy. The researchers found a significant correlation between PSA levels above 0.09 ng/mL and risk of biochemical relapse, distant metastasis, PCa-specific death, and overall survival. A PSA decrease after radiation therapy greater than 95% was associated with lower risk of relapse and metastasis.

The results suggest that PSA levels need to be low to be associated with a good prognosis, Dr Zelefsky said. Among patients who have received hormone and radiation therapy but still have PSA levels above 0.09 ng/mL at the end of treatment, “we need to be more vigilant, and consider more aggressive therapies, as these patients appear to have a higher risk of disease,” Dr Zelefsky said.

Amar Kishan, MD, a radiation oncologist and assistant professor at UCLA’s David Geffen School of Medicine, who was not involved in the study, said the results are important because oncologists have traditionally defined a recurrence as a PSA rise of 2 ng/mL above nadir. “That can take time, and is a well-known limitation of the way recurrences are defined post-radiation,” Dr Kishan says. “If instead we can prognosticate earlier who might ultimately recur, we would intervene earlier.”

Refining the accuracy of predictive biomarkers is an important step towards improving oncologists’ ability to prognosticate, Dr Zelefsky said. “Biomarkers that can give us a clue—either through imaging, or blood test results, or genomics—of the likelihood a particular therapy will be successful, may in the future give us more information about whether patients are in need of additional therapies,” he said. “And this information could be helpful in designing new studies to determine that if a particular biomarker shows disease is present or has a high risk of spread, that these patients could be considered for newer treatment programs.”

Despite the large number of patients, the study’s retrospective design presented a limitation, which the authors acknowledged. The study also included higher-risk patients who received external beam radiation at dose levels that may not be as effective as other treatment interventions, Dr Zelefsky said. “The duration of hormones for [high-risk patients] was generally less than we would give nowadays,” he explained. “The outcome could have been different if this cohort of patients had received a longer course of hormonal therapy.”

Dr Kishan says he thinks the findings could be validated by following patients with intermediate- and high-risk disease prospectively, obtaining relevant PSA measurements, and ensuring all patients receive adequate ADT. “Another [approach] would be to try to validate the findings in patients who were followed prospectively and might have these data already available,” Dr Kishan says.

Future research based on this study could evaluate patient outcomes to determine whether new protocol therapies would be helpful for patients whose PSA levels remained high after therapy, Zelefsky said. 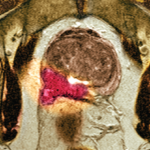