Adding enzalutamide rather than bicalutamide to androgen deprivation therapy (ADT) for metastatic hormone-sensitive prostate cancer (mHSPC) is associated with improved outcomes in Black men, according to a new study distinguished by its relatively high enrollment of patients in this racial group.

In a phase 2 trial that included 71 men with mHSPC randomly assigned to receive either enzalutamide or bicalulamide in addition to androgen deprivation therapy (ADT), the 7-month PSA response rate — the primary endpoint — among Black patients was significantly higher among enzalutamide-treated patients compared with bicalutamide recipients (93% vs 42%). Among non-Black patients, the response rate was 94% among enzalutamide recipients and 86% among those taking bicalutamide, a difference that was not statistically significant.

The investigators, led by Ulka N. Vaishampayan, MD, of the University of Michigan in Ann Arbor, defined PSA response as achieving and then sustaining a PSA level of 4.0 ng/mL or less within 7 months of starting therapy.

“The incorporation of enzalutamide in mHSPC therapy overcame the disparity in biochemical response rate and OS outcomes between Black and non-Black patients,” Dr Vaishampayan and colleagues reported in JAMA Network Open. “The regimen was well tolerated, and the favorable risk benefit profile makes it crucial to strongly consider the addition of enzalutamide to ADT in Black patients with mHSPC.”

For the overall cohort, the PSA response rates with enzalutamide and bicalutamide at 12 months were 84% and 34%, respectively.

The men in the study had a median age of 65 years. Black men made up 41% of the overall cohort. The median baseline PSA level was 56.3 ng/mL in the enzalutamide group and 60 ng/mL in the bicalutamide arm. Of the 71 patients, 59 (83%) had bone metastases only. Dr Vaishampaya’s team noted that they reported the PSA response rate for 58 patients because 13 patients did not have a month 7 PSA value.

Also as part of the trial, the investigators collected biopsy specimens to look for genetic biomarkers associated with PSA progression and OS. Black patients with high levels of ERG, CXCR4, or AKR1C3 had a numerically lower likelihood of having a PSA response compared with non-Black patients. Patients treated with bicalutamide who had a low copy number of these genes had a higher PSA response rate compared with those who had a high copy number.

The authors noted that black men are “grossly underrepresented” in prospective trials that enroll men with advanced prostate cancer. “Given the potential for racial disparity in prostate cancer outcomes and the underrepresentation of Black men in mHSPC clinical trials, the current study design required at least 30% enrollment of Black patients,” they wrote.

Study strengths include the prospective trial design, stratification by race, and inclusion of a relatively large proportion of Black patients. “Cumulatively, these factors make the study conclusions meaningful for clinical application,” the authors wrote.

In an accompanying editorial, Andrew W. Hahn, MD, of the University of Texas MD Anderson Cancer Center in Houston, and coauthors commented that Dr Vaishampayan and colleagues “show that the addition of enzalutamide to ADT improves outcomes, irrespective of race, and most importantly, they demonstrate that clinical trials in prostate cancer can, and should, enroll more Black patients.”

The editorial writers also observed, “Ultimately, racial disparities in prostate cancer will be better understood with greater emphasis on enrollment of Black men in clinical trials across disease stages. Increasing the enrollment of Black men in clinical trials requires increased focus from academic and industry leaders and input from community leaders and patient advocates to address the historical and societal barriers that prevent them from participation.”

Disclosures: The trial was supported by Astellas Pharma Global Development, Inc., which provided the enzalutamide and funding. Please see the original reference for a full list of authors’ disclosures. 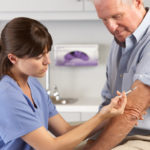 Prostate Cancer Hormone Therapy May Not Protect Against COVID-19 Virus