Virtually all early postoperative radical prostatectomy (RP) complications are directly related to patient age, investigators concluded based on a recent retrospective study. The influence of age on postoperative complications is especially pronounced among patients aged 70 years or older.

As a result of study findings, older patients should be informed about potentially higher complication rates, according to investigators. “Similarly, older patients may require longer hospital stay, even though the absolute increase in individual patients may be marginal at best,” the authors wrote in European Urology Focus.

The study found that each 1-year increase in age at the time of surgery independently predicted significant 2% increased odds of complications overall and 3%, 3%, and 2% increased odds of intraoperative, cardiac, and pulmonary complications, respectively, after adjusting for multiple variables, Felix Preisser, MD, of University Hospital Frankfurt in Germany, and colleagues reported. Increasing age also was associated with longer hospital stays.

For the study, Dr Preisser’s team used the National Inpatient Sample database to identify 68,780 patients with prostate cancer (PCa) who underwent robotic-assisted or open RP from 2008 to 2013. Patients had a median age of 62 years. The database includes 20% of US inpatient hospitalizations, with discharge abstracts from 8 million hospital stays, the authors noted. In the study cohort as a whole, 57.3% underwent robotic-assisted RP (RARP). Overall complications developed in 12.4% of patients.

Dr Preisser and his colleagues analyzed the subgroup of patients who underwent RARP and found that the effect of patient age on the risk of overall and other complications was similar to that of the entire cohort.

Most men who undergo RP are aged 45 to 75 years, the authors noted, but with an aging population, physicians will need to separate biological age from chronological age and provide individualized care.

In addition to its retrospective design, limitations of the study included an inability to adjust for tumor characteristics. “Indeed, patients with locally advanced PCa may suffer from a higher complication rate than those with localized cancers,” the authors wrote. “It is possible that a larger proportion of elderly patients may have harbored more advanced PCa at the time of RP.”

Dr Preisser’s team also pointed out that they were unable to adjust for other cancer-related variables, such as the use of neoadjuvant chemotherapy, neoadjuvant androgen deprivation therapy, and preoperative radiotherapy, in addition to some patient characteristics, such as performance status, differences in laboratory values, and opioid use.

Gerald Andriole, MD, Professor and Chief of the Division of Urologic Surgery at Washington University School of Medicine in St. Louis, Missouri, said the new study validates the importance of considering age when recommending RP and provides important data for clinicians when counseling their patients.

“Even with adjustment for common baseline co-morbidities, rising age was associated with higher rates of certain post-op complications,” Dr Andriole told Renal & Urology News. “This observation validates the guidelines of many entities, such as the NCCN [National Comprehensive Cancer Center] and the AUA [American Urological Association], that before recommending radical prostatectomy to men with aggressive prostate cancer, surgeons should be confident that the patient has a high probability of at least a 10- to 15-year survival.”

James Mohler, MD, Professor of Oncology and Chief of Inter-Institutional Academics at Roswell Park Comprehensive Cancer Center, Buffalo, New York, said he is not surprised by the study findings. NCCN has advocated for considering physiological age/life expectancy versus chance of PCa-related death and chance of cure versus chance of complications when counseling patients regarding the various treatment options for localized PCa (observation, active surveillance, surgery, and radiation).

Dr Mohler, who chairs the NCCN Clinical Practice Guidelines in Oncology Panel for Prostate Cancer, said the guidance provided by this current study may help improve outcomes. “First, the findings may stimulate more complete discussions of radical prostatectomy as a treatment option. Second, the findings should help raise awareness that chronologic and physiologic age are different.” 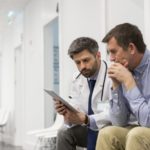