Overall survival at 3 years was 83% among darolutamide-treated patients compared with 77% among placebo-treated patients. Darolutamide reduced death risk by a significant 31% (P = .003) in patients with a PSA doubling time of 10 months or less with a clear separation at 18 months, Karim Fizazi, MD, PhD, of the Institute Gustave Roussy in Villejuif, France, and colleagues reported in the New England Journal of Medicine.

“An overall survival benefit was observed even though more than half the patients in the placebo group received subsequent treatment with darolutamide or another life-prolonging therapy,” Dr Fizazi’s team wrote.

Over a median 29 months, adverse events (AEs) occurred in 85.7% of the darolutamide group, 79.2% of the placebo group, and 70% of placebo recipientswho crossed over to darolutamide. No new long-term safety signals were observed since the interim analysis, and the proportion of patients who discontinued treatment remained the same (8.9% vs 8.7% with placebo). All AEs increased slightly with longer exposure to darolutamide, as expected. Fatigue was reported by 13.2% of the darolutamide group compared with 8.3% of placebo group. Bone fracture occurred in a higher proportion of  darolutamide-treated patients (5.5% vs 3.6%), but this difference decreased after adjustment for duration of drug exposure. All other AEswere reported by roughly similar proportions of both groups, including falls, seizures, mental impairment, and hypertension.

“This updated analysis of the ARAMIS trial confirms the low potential for central nervous system-related effects expected with darolutamide, which has been postulated to be due to the very low penetration of the blood-brain barrier that has been reported in preclinical and clinical trials of darolutamide,” Dr Fizazi’s team pointed out.

In the trial, investigators randomly assigned 955 patients to darolutamide (600 mg twice daily), a structurally distinct androgen receptor inhibitor, and 554 patients to placebo, while patients continued to receive androgen deprivation therapy. More than half of placebo recipients later crossed over to receive darolutamide or other life-prolonging therapy (eg, chemotherapy, another antiandrogen, or sipuleucel-T). The trial included only 52 Black patients, which limits the generalizability of the findings to this group.

This clinical trial was supported by Bayer HealthCare and Orion Pharma. Please see the original reference for a full list of authors’ disclosures. 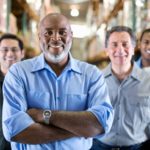