Patients with common cancers are generally more likely to die from causes other than their cancer, according to research published in JNCI Cancer Spectrum.1

The study suggested that, for most common cancers, patients who survived more than 10 years after diagnosis were unlikely to die from their primary cancer.

However, more than 80% of patients with lung or bronchus cancer died from their primary cancer, most within the first 5 years after diagnosis.

In addition, patients with prostate or breast cancer had an increased risk of cancer-specific mortality that persisted for 30 to 35 years after diagnosis.

“The biggest question that comes up in all of our lives when somebody receives a cancer diagnosis is, how long am I going to live? What’s going to happen to me?” said study author Donna Spiegelman, ScD, of the Yale School of Public Health in New Haven, Connecticut.

“It turns out, there’s a lot more information about that … than might have previously been understood,” she added.

The researchers observed 2 separate trajectories for cancer-specific mortality that differed by cancer type.

The first trajectory was a “sustained but low” excess risk of cancer-specific mortality after diagnosis. This trajectory applied to patients with prostate cancer and breast cancer.

The second trajectory the researchers observed was a “greatly diminished” risk of index cancer-specific mortality at 10 years or more after diagnosis. This applied to patients with lung, colorectal, urinary bladder, uterine corpus, and thyroid cancers as well as melanoma.

For these cancers, most deaths from the primary cancer occurred within 10 years after diagnosis, the researchers explained.

For women with thyroid cancer, for example, the cancer-specific cumulative mortality rate was 2.1% at 5 years, increased to 3.2% at 20 years, and remained the same from 20 years to 35 years. However, the all-cause mortality rate in this group rose from 3.6% at 5 years to 42.6% at 35 years.

“As an oncologist caring for a colorectal cancer survivor …, after 5 years, you’re going to have to really be paying attention to what else is likely to be affecting your patient’s health after that point,” Dr Spiegelman said.

The researchers did note that patients with lung/bronchus cancer had poor short-term and long-term survival, and most of these patients died from their primary cancer.

“One of the big messages from this study is that lung cancer has the worst survival long- term, and we need to do better for these patients,” said Shahrukh Hashmi, MD, of the Mayo Clinic in Rochester, Minnesota, who was not involved in the study.

Results May Not Be Generalizable

“The data is from health care professionals — nurses and physicians mainly — so they do not represent the general public,” Dr Hashmi noted. “Some lifestyle factors in this cohort are different than the general public; fewer smokers, alcohol intake was less. So it likely underrepresents the subsequent cancers that may occur in these people because of fewer unhealthy habits.”

“The study uses 3 different data sets, which gives it a lot of strength, and it is one of the novel studies that is truly changing the paradigm of how we think of long-term cancer survivorship,” Dr Hashmi continued. “But the majority of the participants were White, which itself introduces bias, and you cannot generalize to all populations.”

As cancer mortality is known to differ by race in the United States,2 it is important to replicate these studies to get data that better represent the demographics of the US population, according to Dr Spiegelman.

“We’ve had great luck with these health professional cohorts, with over 90% response rate and 30 years of follow-up, so it is quality data but does sacrifice representativeness,” Dr Spiegelman said.

“It is extremely important to replicate this kind of work in more representative populations,” she added, noting that there are now more representative data cohorts around the United States. However, many do not yet have the same type of long-term follow-up as the cohorts used in the current study.

“I think the bigger study of interest from the same cohort is how they actually died, besides cancer,” Dr Hashmi said. “Did they die of 1 disease or 2 diseases or 3 diseases? And what was the actual outcome?”

Disclosures: Dr Hashmi, Dr Spiegelman, and the other study authors reported having no conflicts of interest. 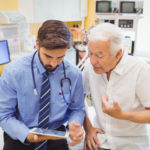