Specific genes may signal aggressive prostate cancer (PCa) in African American men, according to researchers of a new study. The findings may partly explain ethnic disparities in PCa, which have been linked to both biologic and socioeconomic factors.

Investigators led by Kosj Yamoah, MD, of Thomas Jefferson University Hospital in Philadelphia, examined mRNA expression of 20 biomarkers associated with prostate cancer initiation and progression by ethnicity. The researchers matched 154 African American to 243 European American patients from 4 institutions based on the Cancer of the Prostate Risk Assessment postsurgical scores (CAPRA-S) of their tumors.

According to results published in the Journal of Clinical Oncology, 6 biomarkers showed significant differential expression in black men: ERG, AMACR, SPINK1, NKX3-1, GOLM1, and androgen receptor. Risk of stage 3 PCa in African American patients was predicted by dysregulation of specific biomarkers (AMACR, ERG, FOXP1, and GSTP1) as well as by tumor suppressor mutations in NKX3-1 and RB1 that caused loss of function. In addition, dysregulation of GOLM1, SRD5A2, and MKi67 predicted 3-year biochemical recurrence and metastasis at 5 years. The researchers observed that more African American than European American patients (51 vs. 35%) had triple-negative PCa (i.e., absence or low levels of ERG, ETS, and SPINK1).

“Much of what we understand in terms of the genetics of prostate cancer to date has been based on clinical trials in Caucasian men,” Dr. Yamoah explained in a news release. “However, the data here suggest that a subset of African American men may have a type of prostate cancer that arises from molecular pathways that are distinctly different from those of European American men.”

African American patients with this biomarker signature may have better survival if they are treated with a different approach than standard of care, Dr. Yamoah suggested. The biomarkers need to be validated and refined in further studies involving larger groups of patients. 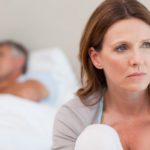