A new study fuels the ongoing debate over the health risks of bicycle riding for men: Researchers found that cyclists who bike more may face a higher risk of prostate cancer, but not a greater chance of infertility or erectile dysfunction. The study appeared in the the Journal of Men’s Health.

Researchers surveyed more than 5,000 male cyclists from 2012 to 2013. Eight percent of the men reported erectile dysfunction problems, although they weren’t more common in men who biked more. The investigators did find links between erectile dysfunction and three factors — high blood pressure, smoking, and older age. The researchers didn’t find any link between more cycling and more cases of infertility, which 1 percent of the men reported.

However, the findings aren’t definitive, and they conflict with previous research on impotence and infertility. Lead author Milo Hollingworth, M.B.B.S., a research associate at University College London, acknowledged to HealthDay that the findings are “difficult to interpret.”

He stressed that “men shouldn’t worry about increasing their risk of prostate cancer by cycling. Men should cycle as much as they did before. The benefits for your heart, lungs, whole body, and mental health are much more important.” 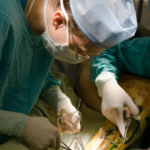