“Clinicians should carefully weigh the risks and benefits of ADT in patients with a prolonged life expectancy,” the authors concluded in a paper published online ahead of print in BJU International. “Routine screening and lifestyle interventions are warranted in at-risk subpopulations treated with ADT.”

Guidelines support ADT as an adjunct to radiotherapy for men with high-risk and locally advanced PCa, but do not recommend it as a primary treatment for low-risk PCa, they noted. Various large observational studies have demonstrated associations between ADT and an elevated risk of cardiovascular morbidity.

Using the Surveillance, Epidemiology and Ed Results (SEER) database, Marianne Schmid, MD, of Brigham and Women’s Hospital and Harvard Medical School in Boston, and collaborators identified 50,384 men diagnosed with localized prostate cancer (PCa) and compared those who received either GnRH agonists or orchiectomy within 2 years and 6 months of PCa diagnosis, respectively, and those who did not. The investigators stratified GnRH use using monthly equivalent doses (less than 8 or 8 or more doses). They stratified patients according to life expectancy: less than 5 years, 5–10 years, and more than 10 years. In addition, the investigators examined the effect of ADT on overall cardiac events, coronary heart disease (CHD), acute myocardial infarction (AMI), and sudden cardiac death (SCD).

Orchiectomy was not associated with overall cardiac events, AMI, or SCD, and was protective against cardiac-related interventions, Dr. Schmid’s group reported.

“Taken together, our findings suggest that patients with longer life expectancy are most at risk of cardiac morbidity after ADT administration,” the authors wrote. “In consideration of previous reports and our study findings, it is worrying and disappointing that one in three patients still receives primary ADT as the sole treatment for localized PCa.” 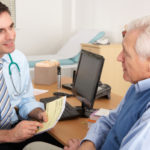