“Addition of docetaxel to androgen-deprivation therapy seems to be unwarranted in patients with high-risk prostate cancer without metastases in the absence of better predictors of risk for metastatic disease,” a team led by Stéphane Oudard, MD, PhD, of Georges Pompidou Hospital in Paris, reported in JAMA Oncology.

The trial enrolled 254 men with nonmetastatic PCa who experienced PSA recurrence after radical prostatectomy, radiation therapy, or both. Investigators randomly assigned men to receive ADT plus docetaxel or ADT alone. In each group, 1 patient withdrew consent and 1 was lost to follow-up, leaving 125 men in each group for analysis.

At a median follow-up of 30 months, the median PSA PFS—the study’s primary outcome—was 20.3 months in the ADT plus docetaxel group and 19.3 months in the ADT-alone arm, a difference that was not statistically significant, according to the investigators.

In addition, at a median follow-up of 10.5 years, the investigators observed no statistically significant difference between the study arms with respect to radiologic PFS and overall quality of life.

The men in the study were enrolled from 28 centers in France. Men in ADT plus docetaxel arm and the ADT-along arm had a median age of 64 years and 66 years, respectively. All patients received ADT for 1 year. The dosage regimen of docetaxel was 70 mg/m2 every 3 weeks (6 cycles). 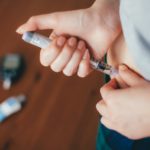