Lior M. Hirsch, MD, and Larry E. Goldstein, MD, of Thomas Jefferson University Hospital in Philadelphia, assessed the effectiveness of acupuncture in 7 PCa patients experiencing 10 or more hot flashes per day in the moderate to severe range. The men experienced heat, profuse sweating, and shivering, as well as rushes of blood that produced reddening. Temperature control by the hypothalamus occurred at a decreased set point due to reduced endorphin production from ADT, resulting in hot flashes.

The men received acupuncture twice a week for 6 weeks. A physician acupuncturist inserted sterile disposable needles at 12 acupuncture points in the hands, legs, and abdomen. These points ostensibly affect the kidney, liver, spleen, conception vessels, heart, and lungs. Needles were inserted until “grabbed” by a muscle and patients sensed electrical activity, tension, or numbness. The needles were left in place for 45 minutes and occasionally cooled for 1-minute intervals using surgical sponges dipped in ice water and wrapped around the needle head (a technique used for “Yang” problems of excess). Patients kept a dairy over the treatment period noting the number and severity of hot flashes they experienced each day.

The men experienced significant reduction in the severity of their hot flashes from grade 3 (severe) to grade 2 (moderate) and grade 1 (mild), according to results described in The Canadian Journal of Urology. Their daily number of hot flashes also decreased by more than half.

“The clinical improvement is likely related to acupuncture’s ability to stimulate the release of endorphins, norepinephrine, and serotonin in the hypothalamic thermoregulatory nucleus and modulate the peripheral autonomic nervous system leading to peripheral vascular dilatation,” Drs. Hirsch and Goldstein explained.

Acupuncture may cause soreness and pain during treatment, tiredness, lightheadedness, and sleepiness, according to the National Cancer Institute. Infections may result when non-sterile needles are used, so it remains important to use a licensed acupuncturist and single-use, sterile needles. Medications for hot flashes, by comparison, commonly cause nausea, dry mouth, dizziness, and anxiety.

Acupuncture’s benefits may decline with time and may require repeated treatments, the investigators noted. They cited a recent review that found at least 3-month durability. Larger trials on acupuncture are needed. 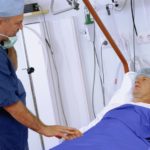