Adding abiraterone to standard of care significantly improves outcomes in men with high-risk nonmetastatic prostate cancer and metastatic castration-sensitive prostate cancer, according to separate studies presented at the ESMO Congress 2021.

One study, led by Gerhard Attard, MD, PhD, John Black Charitable Foundation Endowed Chair in Urological Cancer Research at University College London, UK, examined the effect of abiraterone plus prednisolone, with or without enzalutamide, used in combination with androgen deprivation therapy (ADT) in 1974 patients with nonmetastatic high-risk prostate cancer who participated in the STAMPEDE trial. Investigators randomly assigned patients to receive ADT with or without abiraterone (914 patients) or ADT with or without abiraterone plus enzalutamide (1060 patients) for 2 years. Recipients of ADT alone made up the control arm. Metastasis-free survival (MFS) was the primary endpoint.

“Based on these results, all men with high-risk nonmetastatic prostate cancer should be considered for 2 years of abiraterone,” Dr Attard said in an ESMO press release. “This will involve more hospital visits during this period to manage administration of the drug but by reducing subsequent relapse, may reduce the overall burden for both patients and health services.”

In the other study, the phase 3 PEACE-1 trial, Karim Fizazi, MD, of Institute Gustave Roussy in Villejuif, France, and colleagues found that adding abiraterone plus prednisone to ADT plus docetaxel improves overall survival (OS) in men with metastatic castration-sensitive prostate cancer (mCSPC).

In the ESMO press release, Maria De Santis, MD, Chair of Interdisciplinary Urological Oncology, Department of Urology, Charité Universitätsmedizin, Berlin, Germany, commented: “The findings have the potential to be implemented in our daily practice right away as we do not have to wait for the approval of a new drug. The clearly positive results are reassuring and should convince patients and physicians to intensify the treatment of patients with metastatic and high-risk locally advanced hormone/castration-sensitive prostate cancer early on. I expect this kind of treatment intensification to be implemented as a standard of care.”

Disclosure: These studies were supported by Janssen, Astellas, Ipsen, Sanofi, and PHRC. Please see the original references for a full list of disclosures. 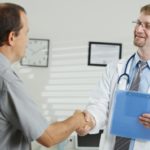