Ultrasound is safe and effective when used to detect and remove renal stones without exposing patients and operating room staff to radiation, according to separate reports.

A retrospective study published online ahead of print in Urology found ultrasound effective in the detection of renal stones. Toru Kanno, MD, PhD, and colleagues at Takeda General Hospital in Kyoto, Japan, followed 428 patients from 2009 to 2011who underwent noncontrast-enhanced computed tomography (NCCT) and ultrasound on the same day.

Ultrasound was able to detect all renal stones, as determined by NCCT, at a sensitivity of 70.0% and specificity of 94.4%. Looking at the ability of ultrasound alone to detect at least 1 stone, the authors found the modality had a sensitivity of 78.9% and specificity of 83.7%. The authors noted that the detection rate increased with stone size, and it was lower for the left upper calyx than for other sites.

Separately, in a feasibility study published online ahead of print in the Journal of Urology, Levi A. Deters, MD, and colleagues at Dartmouth Hitchcock Medical Center in Lebanon, NH, found that ultrasound offered an alternative to conventional fluoroscopy to guide surgeons during ureteroscopy for ureteral stones.

They followed 50 patients with symptomatic ureteral stones that were 8 mm or smaller without a significant ipsilateral stone burden. After temporizing ureteral stent placement, half of the patients were randomly assigned to ultrasound-guided ureteroscopy and the other half to fluoroscopy-guided ureteroscopy. Patients in the ultrasound arm were similar to those in the fluoroscopy arm in stone size (5.9 vs. 5.7 cm), age (56 vs. 52 years), and body mass index (31 vs. 30 kg/m2).

Researchers found no residual stone fragments on follow-up x-ray and ultrasound imaging in 86% of each group and no significant differences in complication rates among the two groups. Operative times and costs were also similar. 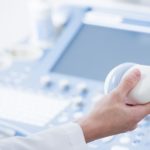