The risks of partial nephrectomy (PN) may outweigh the benefits in some patients with preexisting stage 4 chronic kidney disease (CKD), according to investigators.

Unfavorable outcomes occurred in 15 patients (24%), including 90-day mortality in 3%, postoperative complication of Clavien 3b or greater in 14%, and positive surgical margins in 12%.

Of the cohort, 94% of patients had pre-existing hypertension, 53% cardiovascular disease, and 32% diabetes.

“Our data suggest that patients with stage IV CKD undergoing PN tend to have substantial comorbidities and nonaggressive pathology, and are at risk for unfavorable perioperative outcomes and rapid progression to [ESKD],” Dr Campbell’s team stated. “Renal mass biopsy should be strongly considered to improve oncologic risk stratification and patient selection.”

Alternate strategies such as active surveillance or radical nephrectomy, either up-front or after progression to ESKD, may be more appropriate, particularly if PN is high complexity, patients are African American, or preoperative eGFR is less than 25 mL/min/1.73 m2 , the authors wrote.

The study did not compare patients managed with active surveillance or radical nephrectomy vs PN, which is a limitation.

“Now, use of preoperative nomograms to stratify risk, integration of selective renal mass biopsy to rule out indolent or benign pathology, and the liberal application of surveillance-only approaches when risk supersedes benefit provides the kidney surgeon with essential tools to avoid an ineffective operation.” 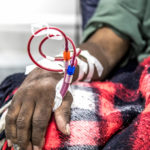