Patients who were classified as favorable risk by Rini criteria had better outcomes than patients classified as unfavorable risk, said Sari Khaleel, MD, of Memorial Sloan Kettering Cancer Center in New York, who presented this research at the meeting.

Data from 508 patients with mRCC were evaluated. All patients were systemic therapy-naive and underwent CRN. Among the 80% of patients with residual disease, 97 went on to AS.

The median follow-up for patients on AS was 31.8 months. The median intervention-free survival (IFS) was 11.6 months, and 58 patients (59.8%) ultimately went on to receive systemic therapy or surgery.

Overall, the AS patients had a median cancer-specific survival (CCS) of 56.5 months and a median overall survival (OS) of 52.3 months.

However, there was no significant difference in median OS between favorable-risk and unfavorable-risk patients — 66.7 months and 46.1 months, respectively (P =.12).

Disclosures: Dr Khaleel reported having no conflicts of interest. 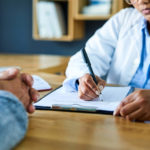