Combination atezolizumab and bevacizumab did not improve overall survival (OS), compared with sunitinib monotherapy, in patients with previously untreated, metastatic renal cell carcinoma (RCC), according to the final OS analysis of the IMmotion151 trial published in JAMA Oncology.1

Researchers said they “do not have a clear explanation” for the lack of OS benefit with atezolizumab and bevacizumab. Prior results from IMmotion151 showed improved progression-free survival (PFS) with the combination.2

The study’s coprimary endpoints were PFS in patients with PD-L1-positive disease and OS in the intention-to-treat population. In the prior analysis, the median follow-up for PFS was 15 months. In the PD-L1-positive population, the median PFS was 11.2 months in the atezolizumab-bevacizumab arm and 7.7 months in the sunitinib arm (hazard ratio [HR], 0.74; 95% CI, 0.57-0.96; P =.0217).

“While the combination of atezolizumab pus bevacizumab did not show improved OS vs sunitinib, the biomarker analyses provide insight into the molecular basis of different survival outcomes,” the researchers wrote.

The rate of grade 3-4 treatment-related adverse events was 46% in the atezolizumab-bevacizumab arm. The most common of these events was proteinuria (8%).

The proportion of patients who discontinued treatment due to adverse events was 28% in the combination arm and 12% in the sunitinib arm.

Disclosures: This research was supported by F. Hoffmann-La Roche Ltd. and Genentech, Inc. Some study authors declared affiliations with biotech, pharmaceutical, and/or device companies. Please see the original reference for a full list of disclosures. 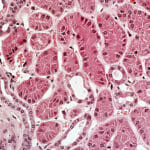