Sarcopenia and elevated inflammation are associated with poor survival outcomes after cytoreductive nephrectomy in patients with metastatic renal cell carcinoma (mRCC), according to research published in Cancer.

The study revealed that patients with mRCC who had sarcopenia and an elevated neutrophil-to-lymphocyte ratio (NLR ≥3.5) had the worst overall survival (OS) after cytoreductive nephrectomy.

At a median follow-up of 15.8 months, 99 patients had died. The median OS was significantly shorter in patients with sarcopenia (15.0 months) than in those without sarcopenia (29.4 months; P =.04). Among all the patients, those with an NLR of 3.5 or higher and sarcopenia had the worst median OS (10.2 months).

“Sarcopenia and measures of high systemic inflammation are additively associated with inferior OS after [cytoreductive nephrectomy] and may be of use in preoperative risk stratification,” the researchers concluded. “Sarcopenia is an objective measure of nutrition that can assist in therapeutic counseling and decision-making for individualized treatment in mRCC.” 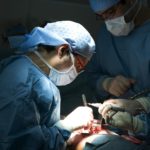