Nivolumab plus ipilimumab improved outcomes in patients with advanced renal cell carcinoma (aRCC) who were ineligible for nephrectomy, according to results of a post hoc analysis presented at the European Society for Medical Oncology (ESMO) Virtual Congress 2020.

“Patients with aRCC who are ineligible for nephrectomy represent a population with high unmet medical need,” Laurence Albiges, MD, PhD, of Gustave Roussy in France, and presenter of the study, said.

The baseline characteristics of the post hoc analysis cohort were similar to the larger population, with a median age of 64 and 76% were male. Most patients’ disease was categorized as intermediate (54%) or poor (45%) risk, and the majority at a minimum of 2 target lesions (97%).

Treatment with nivolumab plus ipilimumab resulted in a decrease in target kidney lesion size of ≥30% in 35% of patients compared with 20% of patients who received sunitinib. This translated to an ORR of 34.0% with nivolumab plus ipilimumab compared with 14.5% with sunitinib. The ORRs in the intent-to-treat (ITT) population were 39.1% and 32.4%, respectively, and 41.9% and 26.8% in the intermediate/poor risk groups.

Duration of response (DOR) was also improved with nivolumab plus ipilimumab, with a median of 20.5 months compared with 14.1 months with sunitinib. In the ITT and intermediate/poor risk groups, the DOR was not yet estimable for the nivolumab plus ipilimumab group compared with 23.7 months and 19.7 months, respectively, in the intermediate/poor risk group.

The frequency of adverse events (AEs), including those potentially immune-mediated, were similar to the full cohort, with no new safety signals.

“In the exploratory subgroup of patients with a target kidney lesion(s),” Dr Albiges concluded, “dual combination immunotherapy with nivolumab plus ipilimumab offers a benefit in kidney tumor reduction, ORR, DOR, and OS vs sunitinib.”

Disclosures: Multiple authors declared affiliations with industry. Please refer to the original abstract for a full list of disclosures. 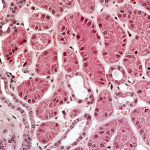 Gene Signatures May Predict Response to Combination ICIs in ccRCC