Early life body size, including birth weight and overweight, may predict a person’s risk of renal cell carcinoma (RCC) as adults, according to investigators.

“Our findings indicate that RCC may originate earlier in life than previously thought and suggest that new explorations into the mechanisms underlying these associations should be undertaken,” a team led by a team led by Jennifer Lyn Baker, PhD, of the Bispebjerg and Frederiksberg Hospital, The Capital Region, Copenhagen, reported in the European Journal of Epidemiology.

For their observational cohort study, Dr Baker and her colleagues obtained information on measured heights and weights of 301,418 children from the Copenhagen School Health Records Register born 1930 to 1985 and information on birth weight by parental report. The investigators identified RCC cases using the Danish Cancer Registry. RCC was diagnosed in 1010 individuals (680 boys, 330 girls) during 8.9 million person-years of follow-up. The median age at diagnosis was 62 years for both men and women.

“Our results show that a high BMI in childhood relates to the risk of RCC, and this extends the associations to younger ages than shown in previous studies,” the authors wrote. “Adjustment for birth weight had little influence on the results, thus suggesting that the observed associations were not due to an effect of children with a high BMI also having a high birth weight.” 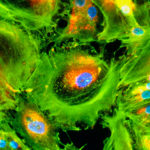