Dharam Kaushik, MD, of the University of Texas Health Science Center in San Antonio, Texas, and colleagues reported results of a meta-analysis of 9554 patients from 8 prospective and retrospective studies published on or before March 2016.

Since a third of CMT patients went on to have salvage RC, they pointed out that prompt salvage surgery after failed radiation therapy may be key to improved outcomes.

Although the review included 3 randomized controlled trials, none showed that overall survival was better with early surgery. Two of the trials offered preoperative radiation to RC patients, precluding analysis.

In addition, CMT was variably defined across studies included in the meta-analysis and did not reflect current standard of care including chemoradiation and maximal transurethral resection of bladder tumor.

Future, larger randomized trials are still needed to answer pivotal questions, according to the investigators. They are currently recruiting MIBC patients for a trial (NCT02716896) of CMT compared with RC in which patients with locally recurrent disease after bladder preservation therapy may select salvage RC. The findings may help identify the most appropriate patients for each treatment modality. 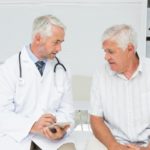 MIBC Patients Should Be Followed Long-term After Cystectomy