Radical cystectomy for localized muscle-invasive urothelial carcinoma of the bladder (UCB) is associated with better long-term overall survival compared with trimodal therapy, but both approaches may be similarly effective in older patients, according to investigators.

A team led by Quoc-Dien Trinh, MD, of Brigham and Women’s Hospital in Boston, compared the effectiveness both treatments among 12,843 patients with muscle-invasive UCB: 1257 (9.8%) who received trimodal therapy (TMT) and 11,586 (90.2%) who underwent radical cystectomy (RC).

The TMT group underwent transurethral resection of bladder tumor followed by 60–65 Gy of radiation therapy delivered to the bladder with concurrent single- or multiple-agent radiosensitizing chemotherapy, as well as those who underwent immediate salvage RC after 39 Gy or more of chemoradiation.

The median follow-up was 44 months among patients alive at last follow-up; 6627 deaths from any cause occurred during the study period.

An inverse probability of treatment weighting (IPTW)-adjusted Kaplan-Meier analysis showed that median overall survival was similar for the TMT and RC patients (40 vs 43 months), the investigators reported online ahead of print in European Urology. An IPTW-adjusted Cox regression analysis with a time-varying covariate, however, showed that TMT was associated with a significant 37% increased risk of death after 25 months of follow-up compared with RC, but Dr Trinh’s found no significant difference in survival between the treatments before 25 months of follow-up. The adverse effect of TMT decreased significantly with age. The researchers observed no interaction with gender.

Although TMT was associated with worse long-term survival compared with RC, “the survival benefit of RC should be weighed against the risks of surgery, especially in older patients,” Dr Trinh and colleagues concluded. 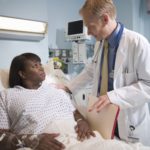