Bladder cancer survival rates continue to be better for whites than blacks, but are similar for whites, Hispanics, and Asian/Pacific Islanders, data show. 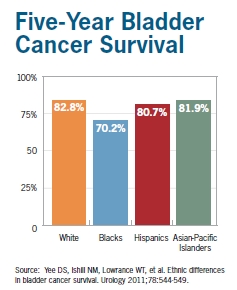 A study that examined trends in bladder cancer survival over a 30-year period revealed that five-year disease-specific survival (DSS) was 70.2% for blacks compared with 82.8% for whites, 80.7% in Hispanics, and 81.9% in Asian/Pacific Islanders, according to a report in Urology (2011;78:544-549). Compared with whites, blacks had a significant 29% increased risk of dying from bladder cancer. The risk was similar for whites, Hispanics, and Asian/Pacific Islanders.

“The survival disparity between blacks and whites persisted within strata of disease stage and tumor grade,” the researchers noted.

The disparities in survival between whites and blacks are not explained fully by differences in disease presentation and receipt of treatment, according to a research team led by David S. Yee, MD, MPH, of Sutter Medical Group in Roseville, Calif. Although stage at diagnosis and disease-specific survival improved over time in all racial and ethnic groups, blacks were consistently more likely to die from their disease, they observed.

“Factors that may explain survival disparities include variation in quality and timing of primary therapy, surveillance after primary therapy, treatment of recurrent disease, comorbidity, and tumor biology,” the authors concluded.

The researchers also observed a disparity in tumor grade. In each time period examined in the study (1975-1979, 1980-1989, 1990-1999, and 2000-2005), black and Asian-Pacific Islanders presented with higher grade tumors than white patients. The study also revealed a trend toward rising rates of poorly differentiated and undifferentiated disease among all ethnic groups.

For the study, Dr. Yee and his colleagues analyzed data from the Surveillance, Epidemiology and End Results (SEER) cancer registry. They identified patients diagnosed with transitional cell carcinoma of the bladder from 1975 to 2005. The study population included 163,973 whites, 7,731 blacks, 7,364 Hispanics, and 5,934 Asian/Pacific Islanders.

In a discussion of study limitations, the investigators pointed out that the SEER database lacks information on patient comorbidity and hospital volume, “factors associated with adverse outcomes after radical cystectomy and which may influence diagnosis and treatment.”