On Monday, the first 12 volunteers received an experimental Ebola vaccine in Liberia, launching vaccine trials there. Over the next year or so, scientists hope to inject 27,000 volunteers. The goal is to test two different shots that could protect people from the deadly disease.

But the number of Ebola cases is steadily declining across West Africa. And that good news is hampering drug and vaccine development, especially in Liberia. The country recorded only four Ebola cases last week, the World Health Organization said. 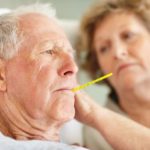