Overweight and obesity in patients with end-stage renal disease (ESRD) are associated with a decreased likelihood of receiving a kidney transplant primarily among women, according to researchers.

“Our findings may be useful in ensuring access to transplantation among women in the current era in which the prevalence of obesity among patients with ESRD is rapidly increasing,” the authors wrote.

The study, led by John S. Gill, MD, of the University of British Columbia in Vancouver, British Columbia, found that the odds of women receiving a kidney transplant decreased as BMI increased. Compared with women who had a BMI of 18.5-24.9 kg/m2 (normal weight), those who had a BMI of 25.0-29.9 (overweight), 30.0-34.9 (class I obesity), 35.0-39.9 (class II obesity), and 40 kg/m2 or higher (class III obesity) had a 5%, 11%, 35%, and 63% decreased likelihood of receiving a transplant, respectively,  according to study results published online ahead of print in the Clinical Journal of the American Society of Nephrology.

Results showed a different trend in the men. Compared with normal-weight men, overweight men and those with class I obesity had a 25% and 24% greater likelihood of receiving a transplant, respectively. Men with class II and III obesity had a 2% and 42% decreased likelihood of receiving a transplant, respectively. 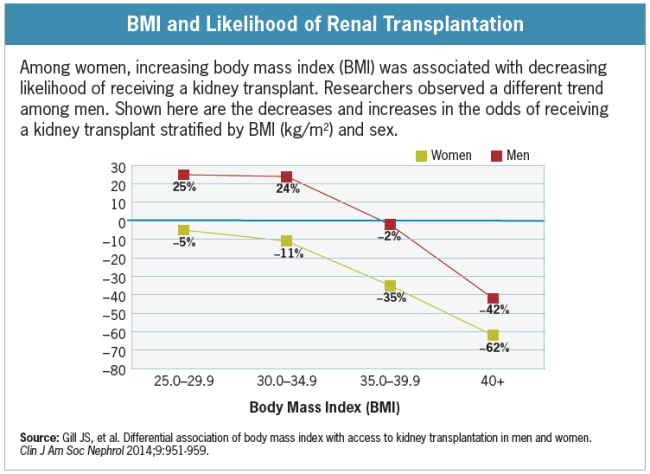 The study showed that obese patients had a higher frequency of being placed on hold, which suggests “the lower likelihood of transplantation after activation to the wait list is in part due to increased comorbid disease burden and medical complications in patients with a high BMI.”

In an accompanying editorial, Anne M. Huml, MD, of University Hospitals Case Medical Center in Cleveland, and Ashwini R. Sehgal, MD, of MetroHealth Medical Center in Cleveland, pointed out that little is known about physician decision making for the study subjects. “Physicians may perceive obese patients as poor surgical candidates or as nonadherent. Surgeons’ perceptions about size mismatching between smaller deceased donors and obese potential recipients may also be a consideration.” They added, however, that why these factors would differ between the sexes remains unclear.

“In the end,” Drs. Huml and Sehgal wrote, “we must realize that obesity is a medical and public health issue, not a character flaw. Unfortunately, obese individuals in our society, especially women, are often subject not only to the health effects of obesity but also to various forms of social stigma and discrimination. We need to make sure that transplant-related decisions are guided by medical considerations and the best interests of patients regardless of their BMI or sex.”