Low levels of androgen hormone are associated with the development of post-transplantation diabetes mellitus (PTDM) in men who received kidney transplants– modifiable risk factor which can prevent the development of the disease, according to research findings published Diabetes Care.

Researchers used a post hoc analysis of a prospective single-center cohort study, which included 243 men (aged, 51±14 years) who received kidney transplants between 2008 and 2011. All participants had a functioning graft for ≥1 year after transplant. The investigators assessed androgen levels, which included dihydrotestosterone (DHT) and total testosterone, at baseline using liquid chromatography–tandem mass spectrometry. The association between the levels of these androgen levels and PTDM development was evaluated.

During the overall median follow-up period of 5.3 years, approximately 11.5% (n=28) of the kidney transplant recipients developed PTDM. There was a clear association between androgen levels and PTDM development, as a greater proportion of patients who had the lowest androgen levels at baseline (tertile 1) developed the disease compared with those in the second and third tertiles (19% vs 12% vs 4%, respectively; P =.008).

The study had several limitations. Oral glucose tolerance tests are not part of the standard of clinical care for transplant recipients, so it was not used as a diagnostic tool to evaluate the development of PTDM. Additionally, people in the group studied were primarily White (97.5%-100%) and entirely male, which limits the generalizability of the findings.

The researchers concluded that “testosterone metabolism may be a novel modifiable risk factor and mechanism to intervene upon in order to lower the risk of PTDM after kidney transplantation.” 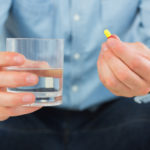 Most Immunosuppressive Meds Not Tied to Worse COVID-19 Outcomes