A new systematic review supports the use of sodium thiosulfate (STS) for treating calciphylaxis in patients with advanced chronic kidney disease (CKD).

The review, which included 45 case reports and case series that described a total of 358 calciphylaxis patients treated with STS, showed that 70.1% of patients experienced improved healing of skin lesions or pain relief and did not die, Daqing Hong, MD, PhD, of Sichuan Provincial People’s Hospital in Chengdu, China, and colleagues reported in Nephrology. Other factors, however, may have contributed to the high response rate, such as dialysis improvements, they noted. More than a third of patients (37.6%) died from calciphylaxis—also known as calcific uremic arteriolopathy—or other CKD complications.

Patients often received STS, an antioxidant and calcium-chelating drug, concomitantly with other medications.

“Although the study was unable to assess the efficacy of sodium thiosulphate alone in the treatment of calciphylaxis, it still reveals a promising role of STS as an effective therapy for calciphylaxis,” Dr Hong and colleagues emphasized.

STS was variably administered. A majority (70.3%) had intravenous (IV) injection, with the remaining receiving combined IV injection and oral tablets, intraperitoneal injection, or infusion during dialysis. The researchers found no significant differences in efficacy among the routes of administration. STS was given an average 3 times a week and doses ranged from 5 to 25 g.

The most common adverse events were nausea and vomiting, sepsis, and metabolic acidosis. Notably, sepsis occurred in more patients who received STS intravenously (20%).

The patients had a mean age of 58 years. Nearly three-quarters of the patients were female and 96.1% were on dialysis for a median 44.5 months, consistent with previous reports. According to the investigators, these factors may represent risk factors. Additional, prospective studies are still needed to determine optimal therapy for calciphylaxis. The authors further suggested that a registry of calciphylaxis patients would yield valuable data. 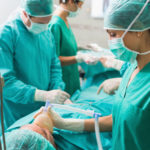