Brendan P. Lovasik, MD, of Emory University School of Medicine, Atlanta, and colleagues searched the US Renal Data System and identified 769,228 adults diagnosed with ESRD from 2005 to 2011 receiving Medicare. Of these, 69% visited the ED at least once by 2015. More than half (55%) visited the ED in their first year of treatment. Annual visits per patient averaged 2.89, 2.48, and 2.54 in the first, second, and third years of ESRD, respectively. Investigators excluded from the study those patients who visited the ED more than 50 times in a year because they probably used the ED for regular dialysis services.

After their analyses, the investigators found that certain sociodemographic factors correlated with higher ED use, including being younger, female, black, or on Medicaid. Tobacco use and institutionalization were other red flags.

Clinical factors included having a catheter or graft hemodialysis (HD) access, a recent diagnosis of ESRD, or comorbid conditions. The catheter-related problems could reflect infections and inadequate dialysis, Dr Lovasik and colleagues stated. During the first year of ESRD, the most common comorbid conditions were respiratory abnormalities (6.6%), congestive heart failure (3.1%), and chest pain (2.9%). The underlying causes for 1.2% of ER visits were preventable: hyperkalemia (0.7%) and fluid overload (0.5%).

Almost half of ED visits by ESRD patients resulted in hospital admissions—a rate 4 times higher than the national average. The top reasons for admission during the first year of treatment were HD access complications (12.6%), septicemia (7.8%), and congestive heart failure (7.5%). Hyperkalemia occurred in 1.1% of patients and fluid overload in 1.2%.

Good clinical care can reduce some of these occurrences, according to the investigators. Infections and cardiovascular abnormalities, for example, can be mitigated.

“Focusing on modifiable factors associated with ED use, such as ensuring that patients with chronic kidney disease have early access to nephrology care and placement of fistulas, could lead to improved care for patients with ESRD and decreased costs for health systems,” Dr Lovasik and colleagues wrote. 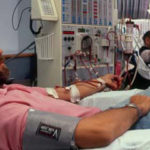