Certain metabolic biomarkers with a high diagnostic efficiency for systemic lupus erythematosus (SLE) have been identified, according to study results published in the Clinical Immunology.

A total of 163 participants were recruited, of whom 133 were patients with SLE and 30 were healthy controls. All of the patients with SLE met at least 4 of the American College of Rheumatology classification criteria for SLE and had no history of other autoimmune diseases. Disease was evaluated with the use of the Systemic Lupus Erythematosus Disease Activity Index (SLEDAI). Inactive SLE was defined as an SLEDAI score of 0 to 4 (reported in 63 patients), whereas active SLE was defined as an SLEDAI score of over 4 (reported in 70 patients).

The researchers found that a combination of 4 metabolites could differentiate patients with SLE from healthy controls with an area under the curve (AUC) accuracy of 0.998. They combined 3 lipids to distinguish inactive SLE from active SLE (AUC, 0.767). They then identified the biomarkers for different organ phenotypes of SLE. The AUCs for identification of patients with SLE with KI, SI, BI, and MI were 0.766, 0.718, 0.951, and 0.999, respectively.

The study authors concluded that the current study succeeded in identifying biomarkers associated with various clinical phenotypes in patients with SLE, which could facilitate a more precise diagnosis and evaluation of disease progression in individuals with the disorder. 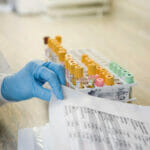